Billboard has reported that the country of Lithuania is seeking to ban an Iron Maiden tour poster on the basis that it scares children and infringes on that country’s child protection laws.

Iron Maiden are scheduled to play the Zalgirio Arena in Kaunas, Lithuania on June 23, 2016. 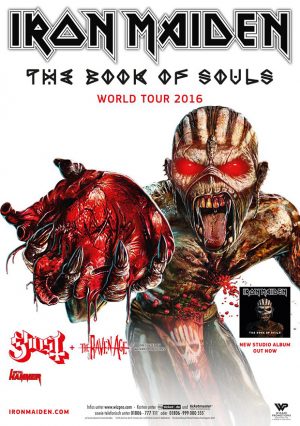 “Authorities in Lithuania are reportedly seeking to ban Iron Maiden‘s tour poster because they claim it is scaring children. The admittedly horrifying poster for the long-running metal band’s The Book of Souls world tour shows their beloved mascot Eddie, eyes aglow, holding out his bloody heart after ripping it from his chest.

According to a translation of a report on the Lithuanian Delfi news service, there are calls to ban the poster for an upcoming show in the nation’s capital because it runs afoul of the country’s child-protection laws. A spokesperson for Live Nation confirmed for the site that the world’s leading tour promoter has received a letter asking for the posters — which have been used around the world to advertise the tour — to be taken down.

After complaints came in from residents of Kaunas — where the band is slated to play the 18,000-capacity Žalgiris Arena on June 23 — Maiden is reportedly under investigation for possible violations of a law protecting minors under 14 from “negative information.” There are also calls for pulling the ads in public places, as well as websites advertising the show and ticketing outlets…”