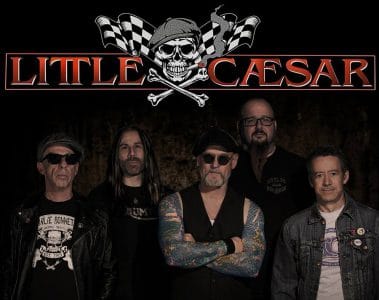 “We are really excited to announce the joining of Mark Tremalgia on Guitar to Little Caesar. Mark has played in Bang Tango, Chambers Brothers and Brother Johnson. In his band “Disreputable Few” he has backed up the likes of Billy Gibbons, Slash and Butch Trucks.He’s a monster player and a super nice dude!!”

Tremalgia is described as follows on the Disreputable Few’s website: “MARK TREMALGIA, Guitar player and Co-Lead Vocals for the Disreputable Few. Started playing guitar at age 6. Took lessons from Jim Shepley the same gentleman who Duane Allman had credited as being his teacher. The professional playing started in a band called Dox Haus Mob, who won a record deal on Dick Clarks battle of the bands! RANDY RAY MITCHELL, guitar & vocals, has played side by side with such notables as Matt Sorum, Daniel Lanois, Jackie DeShannon, Elvin Bishop, John Waits, and Keb Mo, to name just a few. He’s performed and recorded with Warren Zevon, with whom he won a Grammy, as well as Donna Summer and Billy Bob Thornton. He brings not only his decades of professional music experience across a wide spectrum of genres, but the equivalent experience in music recording magic as well.”