Little Caesar‘s long-time frontman Ron Young is suffering from food poisoning which has forced the group to cancel its gig at The Live Rooms in Chester, UK today. Little Caesar are scheduled to release their new studio album Eight via Golden Robot Records on March 16, 2018. 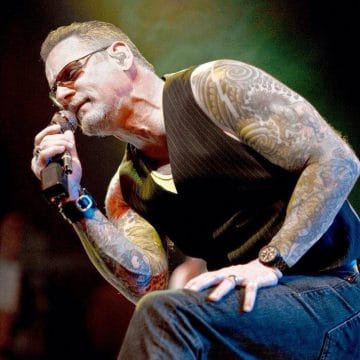 “Due to unfortunate engagement with a Lamb Curry of questionable freshness, I have succumb to food poisoning. The great folks at the walk in clinic have Knighted me Sir Crapsalot, Lord of Reverse Peristalsis. They say my title shall only last about 24 hrs, but I am very sorry to say I must stay on the throne until tomorrow. Therefore we must cancel our show in Chester tonight. I am deeply sorry as there are not enough large trash bags to protect all who attend in the city.

Young was recently interviewed by Sleaze Roxx contributor Tyson Briden and spoke about Little Caesar‘s new studio album Eight as he stated: “You know it’s interesting making records. We’re not in the big studio like the old days. You work hard getting material together. There’s no luxury of the big budget. We took four, six weeks scrutinizing everything as we went along. Back in the day, you played live. Now, you bring it to life in the studio. As we were about to record, we made a guitar change. We discovered it wasn’t the right fit. We went in with the first batch of songs. We did it in three, four blocks. Producer Bruce Witkin did a great job of coming in and doing some great guitar stuff. He has a really good knack for what fit perfect in a song. Then we got Mark Tremaglia as our guitar player.”