Little Caesar playing their debut album in its entirety via live stream today at 3:00 pm EST

Little Caesar will be playing their debut self-titled full-length album in its entirety via a live stream today at 3:00 pm EST. The live stream was originally scheduled for December 18, 2020 but was pushed back to December 26th due to Los Angeles, California’s Covid-19 restrictions. Little Caesar was released via Geffen Records in 1990 after the release of the group’s debut EP Name Your Poison via Restless Records in 1989. 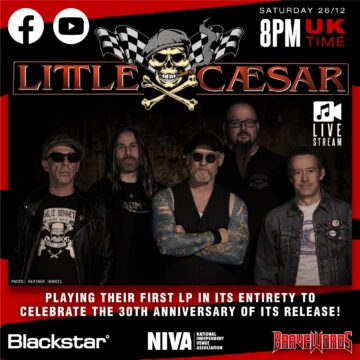 Little Caesar lead singer Ron Young, “Just getting a chance to play together in this Pandemic is a blessing for us” The 30 year memories we have of all the miles that have passed under the wheels gives us a new sense of gratitude. Having the opportunity to help all the struggling venues by doing this is a great feeling. All these venues are the stages where so many people used to go to support and revel in their favorite bands music are all now in danger or extinction. We feel we have to do something to help and protect them.”

A statement from show sponsors Blackstar Amplification reads: “We are stoked to host Little Caesar, playing their iconic 1990 Geffen Records debut LP live in its ENTIRETY for the first time ever. Powered by Blackstar Amplification and in partnership with BraveWords. The band and Blackstar have a long history, with guitarist Loren Molinare having joined the family in 2009 as US Artist Relations and has been a part of the fabric since. This stream is in partnership with the National Independent Venue Association (NIVA) in support of helping struggling independent US venues through this difficult time.”