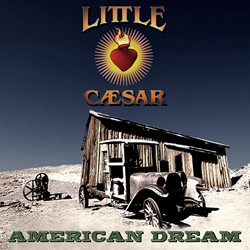 Reunited ’80s rockers Little Caesar have been hard at work on their upcoming album ‘American Dream’, and today revealed the CD’s artwork.

The band — consisting of Ron Young (vocals), Loren Molinare (guitar), Joey Brasler (guitar), Fidel Paniagua (bass) and Tom Morris (drums) — has been in Unison studios with producer Bruce Witkin working on ‘American Dream’, the follow-up to their 2009 reunion release ‘Redemption’. On Monday vocalist Ron Young stated, “Going into to start doing vocals at Unison Studios today… I’m really excited. The tracks are sounding so good!! The boys are really playing their asses off on this one. I’m lucky to play with them… they can make any singer sound good” and updated progress the next day by saying “Started recording lead vocals… everything is sounding great! This is gonna be a REALLY good record… and I aint saying that just because it’s our music… we are pretty tough on ourselves. Just really good Rock n Roll with lots of flavors that span the styles of all the bands and music we love.”

‘American Dream’ is slated for release in late May and will be available for purchase through the band’s website at www.littlecaesar.net. The band’s previous releases, 1990’s self-titled debut, 1992′ Influence and ‘Redemption’, can all be purchased by visiting their website.

Little Caesar first appeared on Metal Blade’s ‘Street Survivors’ compilation before releasing a four song EP called ‘Name Your Poison’ in 1989. They opened for Jane’s Addiction, headlined some of their own club shows, and even appeared on TV’s Unsolved Mysteries which helped them get signed to Geffen, who released their debut full-length and its single, a cover of the Aretha Franklin hit “Chain Of Fools”.