Great news for US bluesy hard rockers Little Caesar‘s fans as the group is gearing up to record a brand new album and to tour Europe in May and June 2018. 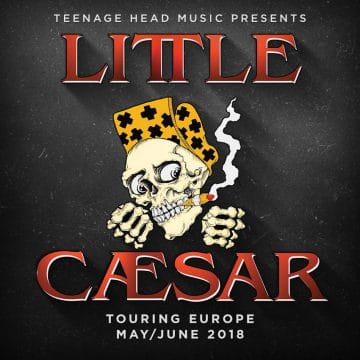 “Classy rockers Little Caesar return to Europe in 2018. The band is gearing up to record a brand new album and bring you a bag full of goodies next May and June.

Tour kicks off on 24 May in Nachtleben Frankfurt.

Little Caesar‘s “Story” on their Facebook page starts as follows:

“Nobody quite knew what to think of these longhaired, tattooed bikers singing such soulful, yet ballsy, rock music when they arrived on the scene in Los Angeles in 1987. They stood out amongst the “Hair Bands” that populated the music scene at the time….a distinction the band wore as a badge of honor.

Much hype surrounded the band as they were managed by music legend Jimmy Iovine, guided by legendary A&R man John Kalodner and produced by Bob Rock. It seemed like a formula for success, yet the band met an unfortunate set of circumstances that left many scratching their heads shortly after the release of their self titled debut album. Many were to speculate why the band never acheived the level of success that their legendary team of backers took as inevitable. Many were to speculate that it was due to the dichotomy between the band’s gruff appearance and their sound. The truth was that the band fell prey to an unfortunate set of circumstances that occured in the limited window that bands get to produce sales in, or get exiled in the music business. Three weeks into the bands initial release, Geffen Records was sold, their label Manager left the company, accountants took over, and their records where lost in transit to their new distributors. As sales dropped off due to the lack of product availability, the accountants shut the project down. And so, another band dies….there’s always more where they came from in the rough and tumble world that is the music business….”