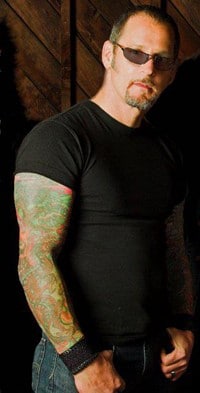 Earlier today Guns N’ Roses frontman Axl Rose confirmed that he wouldn’t be attending the Rock And Roll Hall Of Fame induction ceremony on April 14th. “I respectfully decline my induction as a member of Guns N’ Roses to the Rock and Roll Hall of Fame,” Rose wrote in a long letter. “I strongly request that I not be inducted in absentia and please know that no one is authorized nor may anyone be permitted to accept any induction for me or speak on my behalf. Neither former members, label representatives nor the Rock and Roll Hall of Fame should imply whether directly, indirectly or by omission that I am included in any purported induction of ‘Guns N’ Roses.'”

Now Little Caesar vocalist Ron Young has fired back at his former Geffen labelmate through his Facebook account, saying that Axl Rose “doesn’t deserve to have the honor of induction.”

“It’s just plain self important, self indulgent bullshit. To be placed next to the men and women that changed your life with their music, and to be considered as important, supercedes any of the other bullshit,” Young explains. “Just to be spoken in the same breath as any of those bands would change me forever. Album sales don’t mean shit! I’ll refrain from naming bands of the same period that sold shitloads… but none of them were inducted. To humbly stand before all of those people and thank them for the recognition they bestow upon you… even if you hate the asshole standing next to you, is something I would never let any discrepancy take away from me. He (Axl) will regret this when he is in a home someday and the tattooed geezer next to him in diapers tells him he was an asshole.”

“I’m sure any musician would tell you that they have dreamed of getting a Grammy, let alone a lifetime of achievements and recognition like an induction… even if it is corporate, political bullshit,” says Young. “I have had the honor and good fortune to have a major record deal. It doesn’t mean shit. After you have lived on a tour bus, or had your ass kissed by a million drunks that think they know you, the thing that blows you away is when someone is truly moved by your music. When they know the words, when they relate to your emotions and love the moments you create with your band mates in that short period of time you were in the studio together creating what others feel, is MAGIC.”

“To play music,” the singer continues, “you have to love music. You have to be in awe when you meet the men and women that moved you so much as to dedicate your own life to the same thing as them. When I listen to any of the bands that are in that Hall, I hear the soundtrack of my life. I know that I would be a different person without the music that they created. To get inducted means that you have done the same… not sell records… but created music that has changed the culture of the world in some way. Whether it’s by making an angry teenager feel release, or broken hearted girl feel just a little bit more human, or scared the shit out of someone’s parents when they saw their kids listening to you. To be able to turn down the opportunity to say thank you to those who took the time to listen, and en masse say it deserves to be right next to the people that literally saved my life as a teenager, would be an honor I would never pass up. Ask any musician if they would do that if given the chance.”

“Some people do not deserve to be in a special group of individuals who collectively are exponentially greater than any of the individuals”, concludes Young. “A band is like a motorcycle club. An elite group of people that would kill for each other because of the experiences that they have shared together that makes their bond unbreakable no matter what. Axl Rose ain’t no great singer… but he is a legendary frontman that leads a group of men, and together they made magic. He doesn’t deserve to have the honor of induction because he has no reverence for any of the above.”

Little Caesar are currently in Unison studios with producer Bruce Witkin working on ‘American Dream’, the follow-up to their 2009 reunion release ‘Redemption’. The band released their self-titled debut in 1990 and had some minor success with their cover of “Chain Of Fools”. When Little Caesar fell apart after 1992’s ‘Influence’, Ron Young stepped into Frank C. Starr’s shoes for a Four Horsemen tour and eventually fronted the supergroup Manic Eden, alongside James Christian, Adrian Vandenberg, Rudy Sarzo and Tommy Aldridge. Young also auditioned for Slash’s Snakepit and briefly fronted the Red Hot Chili Peppers when Anthony Kiedis was battling drug abuse.