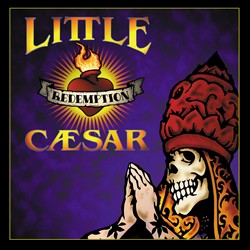 Little Caesar’s ‘Redemption’ To Get Reissued With Bonus Track

Twenty years ago if you were an MTV devotee – and let’s face it most of us were – you’d have had your senses assaulted by blasts of soulful hard rock from Little Caesar, a tatted-up bunch of lean ‘n’ mean biker boys from Los Angeles. They stood out a mile from the big haired, lipstick smeared glam contingency displaying a complete disregard for fads and fashion (always a sign of quality) which was proven by a cool-as-a-cucumber cover of ‘Chain Of Fools’, a sixties r ‘n’b classic made popular by Aretha Franklin. It was a convincing performance alright, separating the men from the boys by virtue of its pulsating energy and vocalist Ron Young’s gargantuan vocal delivery.

In 2010, Little Caesar can be found moving forward with a vengeance. The band has crafted a new album, titled ‘Redemption’, a record full of vim and vinegar. Going back to their roots – not that they ever left them – the emphasis is on tough-guy riffs, blues soaked vocals and the sort of earthy vibe that suggests men on one hell of a mission. This is soulful blues-rock that defies compartmentalization and conjures up images of packed clubs, sweat soaked walls and determination beyond the call of duty.

Look out for European performances later in the year.