Little Villains consisting of lead vocalist / bassist James Childs, guitarist Owen Childs and drummer Chris Fielden have released a video for their new single “Bullet Belt” from their album Achtung Minen!, which will be available tomorrow (on November 27, 2020). 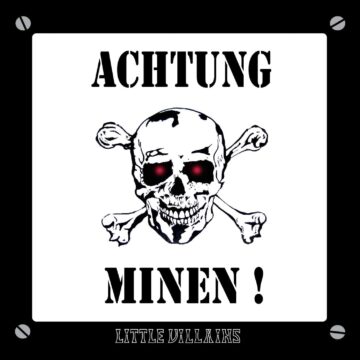 The group worked on many recordings at Phil‘s place, James‘ studio and Unit A studio in Palm Springs. James and Phil worked on and off on their recordings up until 2010. They’d discussed recording more, but Phil became ill and returned to England where he had more of a personal support system.

The second album, Taylor Made, was released on Cleopatra Records in 2020. Alan Davey of Hawkwind played bass on the album.

These first two albums feature Phil’s unmistakable drumming style. The music has been acclaimed in the press and well received by fans interested in Phil’s work outside of Motörhead.