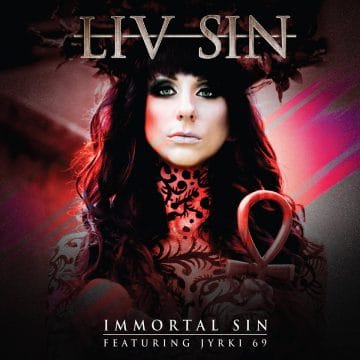 Former Sister Sin lead vocalist Liv Sin has released her second solo venture video, which is a cover of Fight‘s “Immortal Sin” featuring The 69 Eyes frontman Jyrki 69. The song is featured on Liv Sin‘s debut solo album Follow Me, which was released via Despotz Records on April 28, 2017.

In an interview with I’m Music Magazine, Liv Sin advised how she ended up doing a cover of Fight‘s “Immortal Sin”: “That’s a great question because we didn’t have any thoughts about doing a cover on the album. When I was in Germany doing the recordings, we had one of those YouTube nights where we were just sitting around watching YouTube clips. We’re both Halford fans and we were looking at old Priest stuff as well as Halford’s solo stuff. That song came up and both of us loved the riffs and Stefan (Kaufmann) thought we should do a cover of it. We tried it the next day and it sounded pretty cool, but the singing is a little bit too low for me. I thought it could be good to bring someone else in to do the song and I’ve been really good friends with Jyrki from 69 Eyes and he has a really good, deep voice. I called him up that day and I sent him the song over; he helped out with it and I am very appreciative of him doing that.”

You can read the rest of the interview at I’m Music Magazine.