Former Sister Sin singer Liv Jagrell (now known as Liv Sin) was recently interviewed by Rachel Leigh for Decibel Geek and was asked whether her debut solo album Follow Me was helpful to deal with Sister Sin‘s break up. 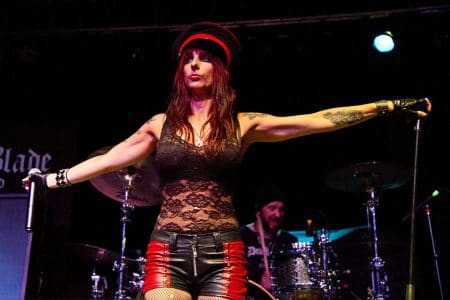 Liv Sin advised: “Yes, for sure, absolutely. I wanted badly to write a song about Sister Sin but I think it was too close still. I’m still a bit sad over it and I think it is the same as if you break up a long relationship, even though you know its right to do it, both parts know its right, it still takes awhile to deal with it and put it down in words. So maybe I’ll write a song on the next album about my wonderful boys in Sister Sin or about that time. I didn’t manage to do it – it was too hard – the pen was stopping every time. So sometimes we need a little bit of space between I think to make that happen. Instead I wrote a lot about other things but it definitely made it easier still because I had something to look forward to – I had a new album, new music, new stuff to look forward to. So it made it very much easier actually.”

In terms of how she ended up choosing to cover Fight‘s “Immortal Sin” from Rob Halford‘s song repertoire, Liv Sin stated: “First of all, if you’re gonna cover a Halford song, you have to choose very carefully, because I mean you’re talking about a metal God, I mean, Rob Halford, it’s very hard to sing and it’s not gonna be better than him anyways, so, first of all, you have to choose carefully and not pick “Painkiller” because it’s very hard to make something new out of “Painkiller”; it’s fantastic how it is, it’s amazing, it’s just stupid to try to cover something like that. So it’s maybe better to try to find a song that is kind of underrated and I think that maybe not everybody knows he had another band when he left Judas Priest for awhile, but he had Fight and maybe people don’t know about this band and haven’t heard this song. I really love the guitar riff to “Immortal Sin”, it’s really simple but it’s really heavy. It was me and Stefan Kaufmann (ex-Accept, ex-UDO), we were listening to a lot of Priest and Halford and the song came up and he said maybe you should cover it because it’s an underrated song and a lot of people haven’t heard it……and of course “Immortal Sin” and Liv Sin so it could be a good song to cover. We tried it out and we actually liked it.”

You can read the rest of the interview with Liv Sin at Decibel Geek.