Liv Sin featuring former Sister Sin lead vocalist Liv Jagrell have released a lyric video for their single “Chapter of The Witch” from their upcoming sophomore full-length album Burning Sermons, which will be released via Despotz Records on September 6, 2019. 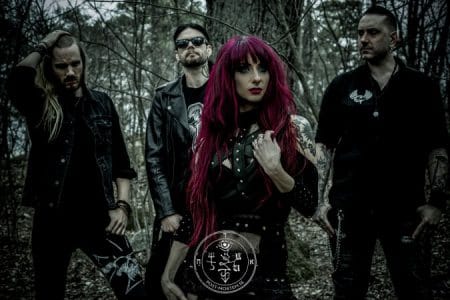 “Sweden’s hottest metal export, Liv Sin, releases their new single and lyric video, “Chapter of the Witch” today. For the lyric video the band has teamed up with Brutal Planet and it can be seen below.

The hook laden third single from the highly anticipated upcoming album, Burning Sermons, “Chapter of the Witch” was produced by Emil Nödtveidt (Deathstars) at Black Syndicate Studios in Stockholm. Jagrell reveals why they elected to put Nödtveidt behind the board, “We wanted to explore a more modern sound with some synthesizers on this album. I think that this album might surprise a lot of our fans. I have known Emil for many years, so it was really fun to reconnect. The first moment he sent us his ideas of our demos I was delirious!’”

Liv Sin‘s Burning Sermons is out on September 6, 2019 via Despotz Records and can be pre-ordered from the label as a bundle here.”