Liv Sin release video for “King Of The Damned” 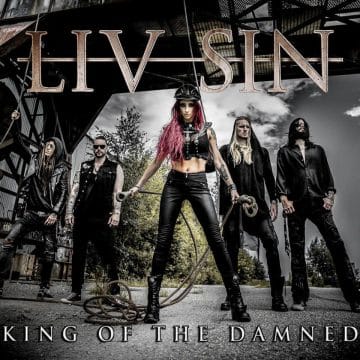 Liv Sin featuring powerhouse singer Liv Jagrell, guitarists Patrick Ankermark and Chris Bertzell, drummer Per Bjelovuk and bassist Tommie Winther have released a video for their song “King Of The Damned” which was released back in early October 2017.

In 2016, singer Liv Jagrell let the world know that she had formed a new band – Liv Sin. With a heavier sound, driven by furious guitar riffs, the band released their debut album “Follow Me” in 2017.

The quintet followed up the release with immense touring during the festival summer and the fall. The band is now planning the next step in order to continue on their journey on becoming the next heavy metal sensation.”

Sleaze Roxx stated the following in its review of Follow Me: “Although the musical style on Follow Me is definitely heavier with more modern overtones and less melodies than anything that Sister Sin had ever come up with, I find myself really enjoying the album. So much so that it really hasn’t left my CD player since obtaining it. Sure, a song like “Godless Utopia” is a bit cumbersome at times but it’s still good enough that I am not longing to skip it every time. As it turns out, my favorite tracks on Follow Me are buried deeper into the album. “Endless Roads” could have easily been found on Sister Sin‘s last album Black Lotus and that’s a great thing! “I’m Your Sin” is just a powerful mid-tempo heavy metal number from Liv Sin. The best track on Follow Me might just well be the album closer “The Beast Inside” which starts off quite slowly but builds and builds until the halfway mark when it reminds me of classic ’86 era Iron Maiden with the guitar melodies and keyboards (I think Maiden used the term “guitar synthesizers” for their Somewhere In Time album) to end the last minute and a half of the song.”