Following the release of her debut solo album Follow Me in April 2017, Liv Sin is already back with some new material as the singer will be releasing the single “King Of The Damned” on Friday, October 6, 2017. 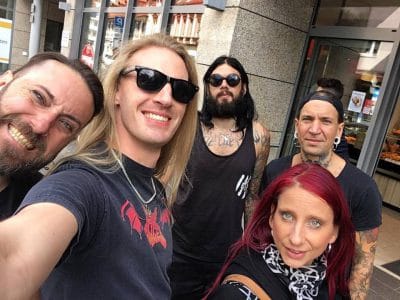 “6️⃣ days left until we release our brand new single “King of the Damned”! Remember… you can download it on Thursday already on our label Despotz Records Bandcamp! ?”

Sleaze Roxx stated the following in its review of Follow Me: “Liv Sin‘s Follow Me is the surprise album of the year for me. I was not expecting myself to like it that much based on the first three songs that had been released in advance of the record but as it turns out, the best tracks and the ones that are the closest to what Sister Sin might have come up with are buried deep in the album. But then again, I should have known better. When you have such a great and distinctive voice like Liv Jagrell has, odds are just about anything you touch will sound pretty damn good. While I always considered Sister Sin as more of a sleaze rock type band (starting with Switchblade Serenades) that turned into more of a heavy metal band, there is no doubt that Liv Sin is heavy metal with some touches of modern metal at its finest.”