On the occasion of the release of their second full-length album Burning Sermons today, Liv Sin featuring former Sister Sin lead vocalist Liv Jagrell have released a video for their song “Hope Begins To Fade” which features Björn Strid of Soilwork and The Night Flight Orchestra. 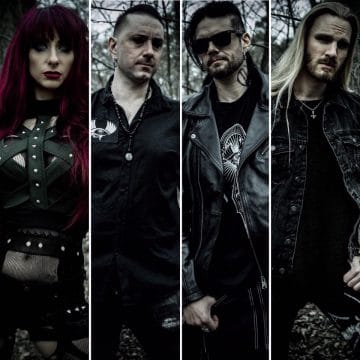 Back when Liv Jagrell was fronting Sister Sin, the songwriting was mainly handed by guitarist Jimmy Hitula and drummer Dave Sundberg. In an interview with Sleaze Roxx back in May 2017, Jagrell was asked whether it was daunting starting her new band and being in charge of the songwriting as well. She replied: “Absolutely, and that’s why at the beginning, I thought maybe I just go solo and then I hire musicians. But not really actually because I really wanted a band. When I started, I picked up my guitar and I was like, “OK. I’m going to write songs now.” And I had so many ideas. I had so many cool riffs in my head but I hadn’t played guitar for ten years. So when I tried playing them, it didn’t sound cool at all [laughs].

Jagrell continued: “It sounded very very bad so it was like, “No. This is not going to work very well. I need to find a guitar player who can understand what I’m after. Understand what I’m thinking in my head and put it out in the guitar. And then I found Patrick [Ankermark] and he did exactly that so I am very grateful that I found him very fast [laughs]. ‘Cause that was hard and also to start writing lyrics. ‘Cause i hadn’t done that for over 10-12 years either. Also, you have to start somewhere like, “Hey! How do I write the song?” But then after a while, you get into it. I start off with something I am feel in or something, and write down what that feeling rings with you, and then you have something to start with. So I got better and better. In the beginning, I had to dig deep to find it [laughs].”