Hessler played a show opening for John 5 & The Creatures at Reggie’s in Chicago, Illinois on March 6, 2016. 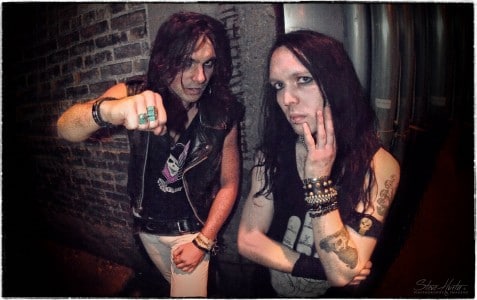 As seems to be Hessler‘s custom, the metal rockers had their performance filmed via Gigity TV and it is now available for viewing free of charge.

Hessler have yet to announce their new line-up since the departure of lead vocalist Jessikill in November 2014 and the subsequent departure of guitarist Frankie Sripada and drummer Derek Spiteri in the latter part of 2014 but Hessler‘s guitarist, founder and now lead singer Igz Kincaid advised the audience on March 6th that he and bandmate / guitarist Erik Michael were being backed up on this night by The Last Vegas‘ band members Adam Arling (on bass) and Nathan Arling (on drums).

Hessler played a number of unreleased songs including “Intruder”, “Killing Machine” and “Farewell.” The group also played a cover of the W.A.S.P. classic “Animal (F**k Like A Beast)” which Blackie Lawless now refuses to play in a live setting.