Livesay lead vocalist Shawn Pelata has announced via Facebook that he has parted ways with the band after being notified that the group had mentioned that it had parted ways with him in a radio interview.

The following message was posted on Pelata‘s Facebook page back on March 15, 2017: 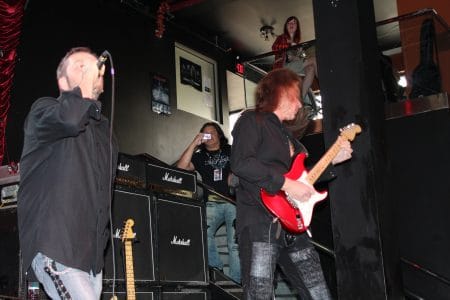 “It has been brought to my attention that, via a radio interview, Livesay has announced they have acquired a new singer. I have been sitting on this info for a while, but since it’s out in the open now, I can confirm that I have indeed stepped down as vocalist for Livesay. Last November it had become apparent that I was simply not the right fit for their situation, so I excused myself.

It was a fun, albeit short, ride and I want to thank the guys for the opportunity. They’re a great band and will do great things! Go see for yourself when they take the stage with Tango Down, Loudness & Y&T at The Chance in April!

Sleaze Roxx attended Livesay‘s performance at Rock N Skull on October 29, 2017 and stated the following about the group’s performance including Pelata: “I am not sure if there were sound issues but I could not hear singer Shawn Pelata‘s vocals that well over the music. It’s either that or his voice is simply not powerful enough to pierce through Livesay‘s music. Let’s hope for the former! Gregg Livesay proved to be somewhat of a master shredder and reminded me a lot of former Deep Purple guitarist virtuoso Ritchie Blackmore. Unfortunately, a lot of Livesay‘s songs sounded very similar on a first listen. My favorite track from “Frozen Hell” was seemingly the band’s heaviest of the night. Overall, Livesay didn’t exactly wow me in any way but I look forward to giving their new album a chance in any case. Although Livesay failed to make much of an impression on me live, the band did have a large line of people waiting to meet them at the Kivel Records‘ merchandise booth after their set.”

In an interview with Rockeyez, Livesay founder and guitarist Gregg Livesay stated as follows about the band’s Rock N Skull experience [as transcribed by Sleaze Roxx]: “… So it was an amazing experience. It was everything that John [Kivel of Kivel Records] said it would be. He had been prepping us for this for about a year in advance and the people were fantastic. Every night was packed. They were music lovers for sure. They were receptive to every single band that was there. We were new faces. Nobody really knew much about us. They had heard that we were coming and after we played, I mean, we had a meet and greet for probably an hour and forty five minutes or something like that. And we sold out! We sold out our album at that show. So yeah, it was a fantastic experience for us, something that I had never done before.” 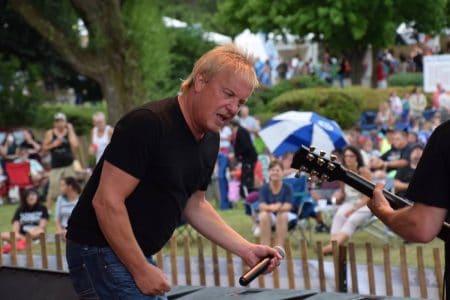 Rockeyez mentioned that Livesay had a show with Y&T, Loudness and Tango Down at the Chance [in Poughkeepsie, New York, USA] on April 28, 2017 and asked the Livesay guitarist what can people expect. Gregg Livesay replied: “Well, you can expect us to go on first. That’s the one thing that they can expect. I think it’s gonna be probably sold out or close to sold out.I think it’s gonna be a great night. We are going to get up there and do pretty much he same set that we played in Chicago and uh, I think we’ll probably have about 45 minutes. And it’s going to be with a new singer. Mike Gill will be on lead vocals for us and i am anxious to see how we are going to gel live. I know that we are working real hard rehearsing and I think it’s going to be a great show.”

Gregg Livesay went on to state: “I have not played out obviously as much as I have wanted to because I have been going through personnel changes. You know, mostly with my singers. I had a singer who’s been great, then they burn out. Then I get another guy, he burns out. Another guy and so forth and so on. Or musical differences and whatever. So, it’s been hard. And I tell you, I say this all the time at any interview that I have ever done. To me, the business is not the hard part. It’s keeping your band together. That is the toughest part of all of this. It is absolutely the toughest part. That’s the biggest challenge — keeping everybody happy, keeping everybody healthy, keeping everybody on the same page — is an absolute work in progress every day. So I am hoping now that I have this new guy Mike Gill who is a great guy, great vocalist. He’s really enthusiastic about playing with us and I hoping that we develop a future with him. It looks, it looks to be very promising.”