New York based melodic rockers Livesay are about to unleash their fourth album Frozen Hell via Kivel Records sometime in October of this year. 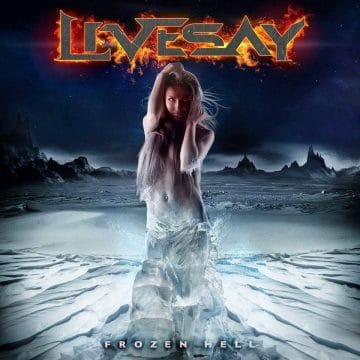 Livesay consist of Gregg Livesay on guitars, Anthony Stahl on keyboards, Tim Huntington on drums, Shawn Pelata on vocals and Matt Mahoney on bass. The melodic rockers have released three albums to date: Livesay (1996), Darkest Hour (2000) and Awaken The Giant (2010).

“We have always prided ourselves here with quality over quantity, and very content with our place in the market due to this approach. So when nurturing a release to where we set the bar, it can take some time. What can I say, we are all perfectionists here.

So far we have been on a streak in my opinion. [The new albums from] Jace Pawlak and Tango Down, have both been very well received. So what better way to end the summer season heading into the fall, than with another monster release?

Ty Sims is hard at work getting the album sounding better than we could have hoped for. He is honestly outdoing himself (yet again!) and he assures me that we will hit our October release in time for the band’s Rock N Skull appearance.

So in the meantime, we want to unveil another eye catching Kivel visual. We couldn’t be happier with how this concept has come to life, and will fit nicely within our rouges gallery. Thanks to the very talented Nello Dell’Omo.

So without any more fanfare, we are very proud to give you the album art for Livesay’s Frozen Hell. Hope you like!!!