Demon Doll Records has unearthed another gem from the past as it has reissued Lixx Array‘s album Mud In Your Eye along with six bonus tracks from the band’s past. 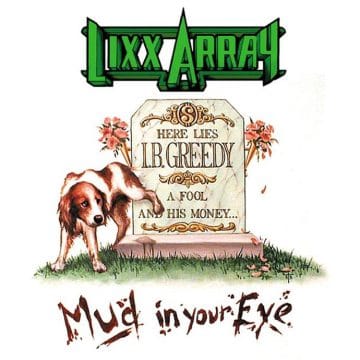 “Blake and the boys are back again for a second go around with Demon Doll Records and we could not be more pleased to unleash a silver pressed official reissue of ‘Mud In Your Eye’.

This album is packed with 13 killer tracks. the first seven being from their final recording sessions with a little surprise appearance from the one and only Lemmy Kilmister on the title track but don’t think the action stops there as the guys deliver sonic blows with “Young Rose”, “For The World To See”, “Mr. Angry” and “Addiction To Pain”. And if your down for the old school, we got 6 tracks from the early days that have LA Sunset Strip Rock written all over them. This album is great from start to finish so get ready to jump in the fray and if you’re luck you’ll get some ‘Mud In Your Eye”!

This album is digitally remastered and packaged with a full set of lyrics to all 13 tracks.

This CD is silver pressed, officially licensed from the band and exclusively available from Demon Doll Records.

For those that did not already grab a copy of the full length reissue of “Reality Playground” (what are you waiting for?) here’s a little refresher on the band and it’s accomplishments.

In 1992, Lixx Array was the talk of the town, sold out shows at The Roxy, The Whiskey and The Troubadour headlined the music press, celebrity sightings at their shows was the norm (appearances by Hollywood celebrities such as Mick Jagger, Alan Thicke, Sam Kinison, Kristy Swanson and Michael Anthony of Van Halen were frequent occurrences).

The owned their home turf of Orange County, CA and their record was practically made out of gold as their full length album ‘Reality Playground’ proved to be the best independent hard rock release in the area!

With songs like “Bad Man”, “Inside Of Me” and “Table For Two”, there was no wonder they were one of the hottest acts in Hollywood. Lixx Array was one of a few bands in the U.S. to be added to the play-lists of top “P1” radio stations, which are typically dominated by the major labels. Over 50 rock stations nationwide had them in regular rotation with several singles appearing on regional top ten lists. The boys also graced the pages of the Los Angeles Times, BAM and Metal Edge as well as scoring four songs in the movie “Animal Instincts.”

https://www.demondollrecords.com/products/lixx-array-mud-in-your-eye-2019-reissue Title track from the 2019 reissue of LIXX ARRAY ‘Mud In Your Eye’. “Uncover…