Lixx’s ‘Loose On You’ EP reissued with six bonus tracks 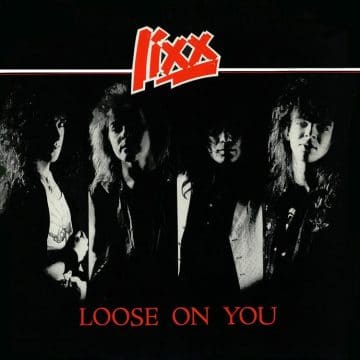 “UK Sleaze Rockers LIXX has teamed up with The DDR Music Group & Metal Legacy Records to finally unleash the reissue of ‘Loose On You‘ as well as six bonus tracks. This album has never been released on CD in any capacity so to call it rare would be an understatement.

Metal Hammer and Raw magazines reported the band as ‘front runners’ in the UK music scene’, with journalist Alan McRorie proclaiming that ‘Lixx are dangerously close to the realm occupied solely by The Rolling Stones.” It wasn’t long before the Fast Forward organization signed the band up on the strength of the buzz they’d created, and by late 1987, Lixx entered Pier House studios to record their ‘Loose On You’ mini-LP (mastered at Abbey Road) and set about touring up and down the country in support of said magnum opus. A gig in London prompted Metal Hammer to claim that ‘infamy was only a few months away’ with songs such as ‘In For A Riot’ ‘Drive Me To Ruin’ ‘Freeloader’ ‘Plain Jane’ and ‘Hot Shot’ already being proclaimed as classics, whilst Kerrang predicted that ‘in another six months they’ll be spreading their own particularly virulent disease right across the land,’ stating that ‘the rock renaissance is well and truly under way.’

The press was similarly effusive with praise for the LP. Kerrang’s Richard Heggie saw ‘Loose On You’ as ‘one of the most accomplished indie debut albums you will ever encounter’ with the review comparing Lixx to Kiss, Guns n Roses, Faster Pussycat, Mama’s Boys and Bon Jovi. Metal Hammer claimed the band shared DNA with Wolfsbane, the Quireboys, and Zodiac Mindwarp and concluded their review saying that they heard ‘half-a-dozen reasons why Lixx could be at the front of the UK hotlist’.

Now for the first time ever, the album including six bonus tracks is finally available on CD.

This album has been digitally remastered and comes packaged with an 8 page booklet with a full set of lyrics.

You can listen to samples of the reissued Loose On You EP and purchase it at the Demon Doll Records‘ website.