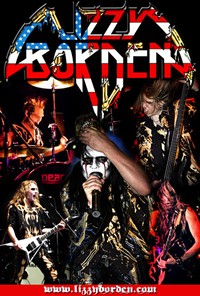 Over the past 2 years the Lizzy Borden “Appointment with Death Show” produced spectacular performances in 11 countries (from North America to Europe) and on the main stages of some of biggest festivals like, “Sweden Rock” (Sweden) “Bang Your Head” (Germany) “Kobetasonic” (Spain), and “Rocklahoma” (USA) all to rave reviews, unanimously declaring Lizzy Borden the hit of the festivals, ‘comparing the Lizzy Borden show to a Kiss concert’.

The shows in Japan and Europe will be a best of, incorporating songs from the entire Lizzy Borden catalog including the latest CD Appointment with Death. We will be performing all of the classic songs like Me Against the World, American Metal, Master of Disguise as well as the new singles Tomorrow Never Comes and Under Your Skin from the latest Lizzy Borden CD Appointment with Death, both songs feature dramatic videos and are in rotation on MTV2. The video Tomorrow Never Comes was nominated for video of the year as well as the top 25 metal video on MTV2 Headbangers Ball.

The schedule is shaping up as follows: