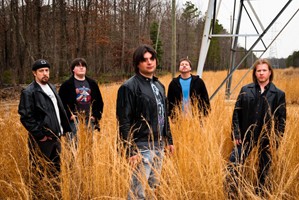 New Jersey’s Loaded Gun have teamed up with Sleaze Roxx to bring you their song “Hard Candy Blues”. The band are currently working on their debut album, hoping to have it done within a few months, but no firm date has been set yet.

Vocalist Ed Owens tells SleazeRoxx.com, “I was born in 1981 so I guess I’ve always liked 80’s music, and that was where my problem was. I never liked the changes in music in the 90’s and 2000’s — what happened to the guitar solos and the vocals? You go to shows and see 80’s bands, or hangout with you friends and listen to some 80’s hard rock and hair-metal, and the question would always come up ‘why don’t they still make music like this anymore?’ So I set out to actually do it myself.”

“I had already been singing in some cover bands and been through voice lessons but never thought I was going to start an original band”, continues the singer. “But why not? I started by making a couple songs with studio musicians so that I would have a product to show other musicians and convience them to join my quest. So I looked to Craigslist and placed some ads, went through some auditions, had a couple guys flake out, held some more auditions and finally had a real band. Dave Classen and Ron Mitchell are the gutarists, Colin Spence is on bass, and Jim Holmes is on drums. So now we are Loaded Gun and we are out playing some shows and getting a good response. What we do is mix it up with a few covers and a few originals — they seem to be a real crowd pleaser.

“We are now side-tracked on finishing our album because we are recording “Hot For Teacher” for a Van Halen Tribute album”, concludes Owens, “but once we get that done we will get back to our last couple songs and the album will be done. Our influences are Cinderella, Tesla, Whitesnake, Warrant, Poison, Van Halen, Dio, Skid Row, Great White, Ratt, Metallica, and Queensryche and I think that shows in our originals.”

For more information on Loaded Gun, and to keep up to date on their debut album, visit www.loadedgunband.com and www.facebook.com/pages/Loaded-Gun/286009014781448.