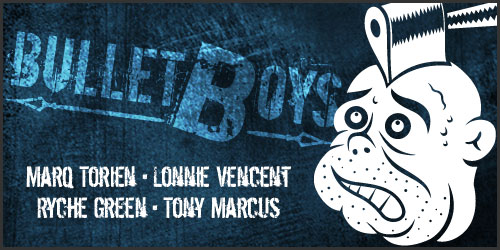 LONNIE VENCENT REUNITES WITH THE BULLETBOYS

It is with great excitement that BULLETBOYS announce the return of original member and bassist LONNIE VENCENT! Lonnie’s major contributions lead to the over success of BULLETBOYS from the beginning and there is no doubt that with Lonnie’s charismatic performances and stage prescence BULLETBOYS take it up a notch. Please welcome back Lonnie Vencent!

With half of the original line up now intact it is only fitting that BULLETBOYS also announce the return of guitarist TONY MARCUS. Tony has joined the band to take over guitar duties. Tony, most notable for his current role as a member in XYZ, also plays in Ashes Of Your Enemy. Tony played in Arcade with Stephen Pearcy (RATT) and also Vicious Delite with Stephen Pearcy (RATT) and Mike Duda (WASP). What most may not know is that Tony was the original replacement for Mick Sweda when he departed in the 90’s. “Music is my life, and rejoining Marq + Lonnie is an honor. Let’s Rock!!” – Tony Marcus

“We’ve been in negotiations with Lonnie and Tony to get them back in the band since May 09′ and had hoped to solidify this lineup for the release of 10c Billionaire and the Rockfest tour. Unfortunately, we didn’t make the cutoffs and had to go with what was available to us at the time good or bad.” – Bill Chavis CEO Chavis Records

BULLETBOYS have been rehearsing in L.A. preparing for leg 2 of the Road To Nowhere Tour 09/10. Dates will be released in the next day or so. BULLETBOYS are days away from launching their new .com which will include some new BulletPig merchandise and are also scheduled for a new photoshoot with world renown photographer Mark Weiss. So stay tuned!