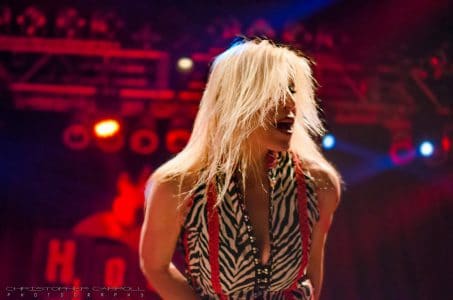 Lewis was asked about Femme Fatale‘s final two shows at the Monsters of Rock Cruise back in February 2019 to which she stated:

“Monsters of Rock Cruise was where it all began for us, so yes, it was emotional for me… I think you can tell in some of the YouTube videos from the cruise that I was a bit choked up at times, and also missed a few words just taking it all in…I wanted to be as present as I could. The fans were amazing and it was tough during some songs like “Rebel” and “Fallin” to see people in the crowd crying…which of course made me emotional too.”

In terms of what prompted her to have an all female line-up for Femme Fatale, Lewis indicated: “Femme Fatale’s guitarist Bill D’Angelo passed away before being asked to do MORC 2013. I knew I needed to make a decision about who the players would be and it just made sense to re-group, re-brand Femme Fatale with all girls… I got the best female players I could, and we were basically a traveling slumber party!”

You can read the rest of the interview with Lorraine Lewis at The Cosmick View‘s website.

Femme Fatale performing “Rebel” at the Monsters of Rock Cruise near Ochos, Jamaica on February 26, 2019:

Femme Fatale performing “Falling In And Out of Love” at the Monsters of Rock Cruise near Ochos, Jamaica on February 26, 2019: