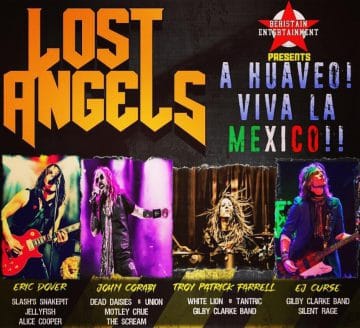 “Aug. 28th – Sept. 1st — Beristain Entertainment along with the McCarthy’s Irish Pub Chain are bringing the “Lost Angels” out on the “Viva La Mexico” Tour hitting five cities in Mexico.

The band to date has toured in India, the UK, Scandinavia and Europe as well as a Midwestern USA run with an appearance at Milwaukee Summerfest as well as a corporate event for Microsoft Inc.

The band continues their tour in the UK in October of this year with Ryan Roxie (current Alice Cooper Band, Casablanca, Roxie77) who takes over for Corabi.