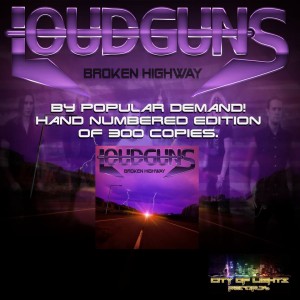 Finnish rockers Loudguns‘ debut album Broken Highway will be re-released as a limited edition collector’s item by their record label Rock It Up Records / City Of Light Records.

“Here’s something very cool for the die hard Loudsters. We’ve been getting so many requests about our first album, so we decided to respond to you. Together with our awesome label Rock It Up Records/ City Of Lights Records we are gonna release a true collectors item during this year! You really don’t wanna miss this chance to get your own copy!! Stay Loud!!”

Loudguns were scheduled to record their new album entitled Revolution Days in early 2016. They have already released two albums: Broken Highway (2011) and Sunset Runaway (2013). Back on October 18, 2015, the group announced that it had parted ways with Lassi Vääränen, their lead vocalist of the last five years.

(Music & Words by: Pilve. Arrangements by: Pilve, Kaasalainen, Vääränen.)The new single is here, hope you enjoy it! Loudguns will be heading into studio on J…