Finnish rockers, Loudguns, will be recording their new album entitled Revolution Days via Rock It Up Records/City Of Lights Records in early 2016, which will follow up their studio albums Broken Highway (2011) and Sunset Runaway (2013).

Loudguns currently consist of Sami Pilve on guitar, Henri Saarinen on guitar, Markus Sirén on bass, Toni Lehmusoksa on drums and Akseli Kaasalainen on keyboards. The band recently parted ways in October 2015 with their lead vocalist of the last five years, Lassi Vääränen, who provided the following message on Loudguns‘ Facebook site back on October 18, 2015: 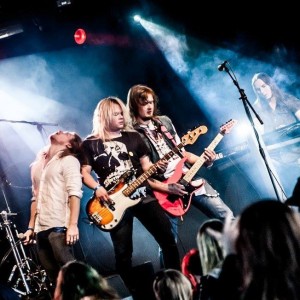 “A message from Lassi!

These past 5 years I’ve had a great journey with Loudguns. I’ve learned so much from music and a LOT from life with Sami, Akseli, Markus, Toni and Henri. This decision has been one of the hardest decisions for me ever cause playing with Loudguns was really awesome! I mean great live shows, studio sessions and two albums! The band gave me a lot. However there’s so much going on in my life at the moment and will be in the future as well, that I have decided to leave the band. When I can’t give 100% for something I just don’t wanna hang around and slow things down. I wanna emphasize that this decision was my personal decision.

Not being the singer in the band of course doesn’t mean that my friendship with these guys will end. We will stay friends forever and keep our precious memories from the road with us as long as we live. Thank you all who’s been a part of this great journey! Love and Rock ’n’ Roll. Cheers… –Lassi“

LOUDGUNS – “Loud ‘n’ Proud” from their coming album “Sunset Runaway”, out via City Of Lights Records in 2015