Love And A .38 Looking For Fans To Help Fund New Album 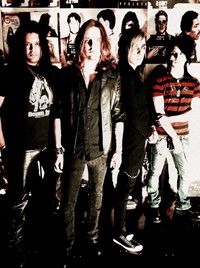 Los Angeles based rockers Love And A .38 are asking for their fans to help fund the recording on a new album. The band have set up a Kickstarter campaign at www.kickstarter.com/projects/1602390277/help-love-and-a-38-record-an-album-get-awesome-stu in an effort to raise $15,000 in 30 days and are offering varies prize packages based on the amount of money pledged.

Says the band, “We’ve been doing this rock and roll thing for a few years now, and as a result we’ve got a lot of music that we want to get out to you guys. Trouble is… if we try to pay for it ourselves… it’s gonna take a long time. A REALLY long time. We’d love to expedite the process. Since we know that we have the greatest fans in the world, we thought maybe you guys could help. The studio’s out here in La-La Land ain’t cheap, and neither are quality engineers. So we’re asking you guys to give whatever you can to help us pay these wonderful people. We’ve put together what we think are some pretty rad reward packages for those who donate… so take a look. We’ve set our goal at $15,000. That should be enough to rent out the studio, pay for all the tracking, mixing, and (hopefully) production. If we miraculously surpass our goal… we PROMISE to put that money directly into a “tour” fund so we can come and rock YOUR hometown. That’s the ultimate goal anyway… to bring our rock to all of our awesome fans. You’ve earned it! So please, if you have the means, lend a helping hand. We won’t let you down!”

Formed in 2009 among the dreamers and dropouts of the Sunset Strip and tempered at the wee hours in Downtown Los Angeles, Love And A .38 has crafted a sound that is both familiar yet fresh. Blending dirty, gritty, growling guitars with catchy, emotionally powered vocals, they have written songs that fans from across the rock spectrum can get behind. After playing their first show to a capacity crowd at the world famous Viper Room, their legend, along with their following, has grown exponentially, causing the legendary Roxy Theatre to name them one of the Top 20 Acts of 2010.

2011 saw Love And A .38 release their first music video for the song “Rock ‘n Lola”, taken from their 2010 self-titled EP,, tour regionally to ever-increasing crowds, perform on both local and national television, play one of the most talked about sets of the Sunset Strip Music Festival, and end the year with two high profile, sold out shows including the world famous Roxy Theatre, all the while maintaining their status as the pre-eminent destination for Rock and Roll excess in Southern California.

The New Year already is already shaping up to be the biggest year so far as the band is currently negotiating licensing deals with NASCAR, and has gained endorsements from Ashdown Amps, EMG pickups, Coffin Case, Remo, and support from Gibson Guitars, Dunlop, and Red Monkey.

Critics, fans, and school-girls agree… with Love And A .38 it’s not a matter of if, but a matter of when. They are not to be trusted — but enjoyed.