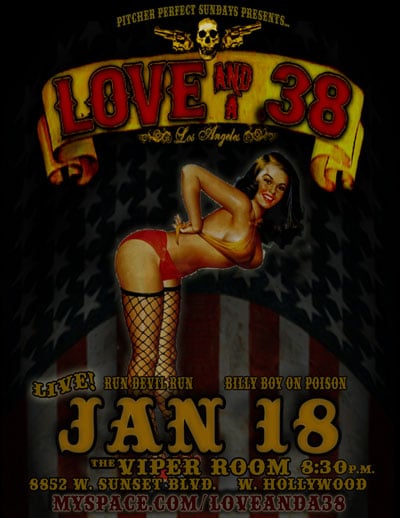 ‘Prepare For Glory’, the new album from Love and a .38 will be available soon on itunes, Amazon, Napster, Rhapsody, eMusic, and independent record stores everywhere! Until then, you can download a couple of songs for free at www.thesixtyone.com/loveanda38

The band cant wait to see all of you at their free show at The Viper Room on Jan 18th! Dont forget to say hi to the band!

About Love And A .38
From day one, the idea was to assemble a band that people would someday call ‘The world’s greatest rock band’. After countless auditions and endless days and nights in the studio, the unveiling has begun. Comparable to artists as The Cult, AC/DC, Billy Idol, Aerosmith and Guns N Roses, Love and a .38 adds modern and original edge to a classic sound.

Love and a .38 band members have toured the U.S. and Asia extensively, playing to sold out crowds that include performances at House Of Blues, The Key Club, Summerfest, and MTV Summit 2006 to an audience of over 50,000 in Manila, Philippines. Collectively, the band has been featured on MTV Europe, MTV Asia, and Myx TV. Publications include City (Finland), FHM (Asia), Fudge Magazine, Manifesto Magazine, Guitar Center Drum Buyers Guide, Pulp Magazine (Asia), and in photography books ‘Faces Of Sunset’, by acclaimed photographer Patrick Ecclestine, and ‘Route 69’ (Europe), by world renown rock photographer, Ville Juurikkala (HIM, Good Charlotte, Juliette Lewis). Love and a .38 have recently completed a group shoot with Jurrikkala, as well as a separate photo shoot with renown photographer, Robert Downs (Travis Barker, Tommy Lee, Drum Magazine).

Love and a .38 has gained the support of networking website Socialvibe (Socialvibe.com), Dirtbag Clothing, Remo, and endorses Rivera Amplifiers.