Big news in the Löve Razër camp as one of its founding and original members — drummer Crissy Stixx — has quit the band. The timing is somewhat odd as Löve Razër just played two shows in Chatham, Ontario, Canada on February 15th (check out Sleaze Roxx’s review of that gig) and in Windsor, Ontario, Canada yesterday (on February 16th). The latter show also served as a fundraiser for the Canadian sleaze rockers who are scheduled to play the prestigious Whisky A Go-Go in West Hollywood, 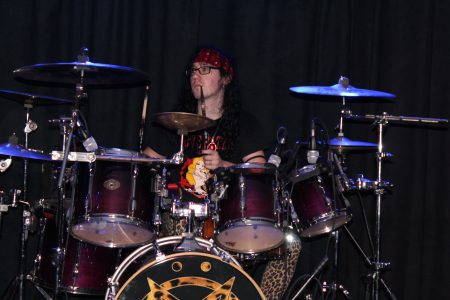 California, USA while opening for Last In Line on March 27, 2020. The good news is that the remaining band members — bassist Metal Mike, lead vocalist Sydney Snow and guitarist Micky Bonez — will be forging ahead and getting a replacement drummer for their upcoming historic gig at the Whisky A Go-Go.

“It is with heavy hearts that we make this heartbreaking announcement.

Today (February 17th), the day following our successful fundraiser, we were blindsided by our drummer, Crissy Stixx, who sent us a Facebook message saying that he was quitting the band. This came as a complete shock to us. We were completely blown away by all the love, support and generosity we received at the fundraiser yesterday. We knew how truly loved we were. Had we known Chris was planning to do this to us, we would have cancelled the fundraiser as this is not fair to all the people who have donated to us and came to support us. We feel empty that this has happened. We are disappointed to share this news with you all. The show, of course, must go on as we are fully committed at this point. We will still be playing the Whisky A Go Go on March 27th. We will be finding a replacement drummer, who will slay on the drums! Given the circumstances and the fact that people had donated a lot of money, we completely understand if you wish for a refund. If you do wish to be refunded, please reach out to us and we will do our best to sort through this unplanned mess. Just know that those funds will still go toward our show in Hollywood and paying for a replacement drummer. We thank you for your continued support and we truly apologize that this has happened.

Much love and appreciation,