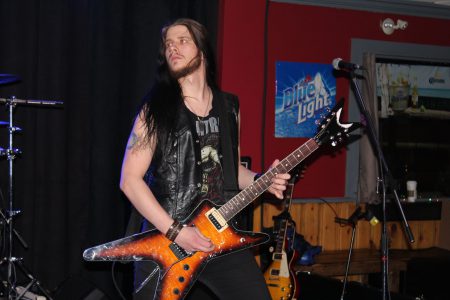 It was mentioned that Löve Razër appear to have a heavier sound with their newest song “Call of The Wild” which they played a handful of times live earlier this year and also released a video teaser for.

In terms of how Löve Razër‘s sound is evolving as the group is gearing up for its follow up to its debut full-length album Border City Rebels, the band members indicated: “The sound will definitely be evolving into the above mentioned heavier sound. Expect more “technical” riffs, but will still be stuck in your head for days…all while maintaining the big hooks, big choruses, and, you know… that Löve Razër sound.”

You can check out the rest of the interview with the three Löve Razër band members at Hair Spray Heaven‘s website.

Sleaze Roxx stated the following in its review of Löve Razër‘s concert at the Fortress Tavern in Chatham, Ontario, Canada on February 15, 2020:

“Löve Razër‘s two sets were really good ones and consisted of all of their released songs to date — the three tracks from their EP Rock ‘N’ Roll Addiction and the eight songs from their full-length album Border City Rebels — along with their stellar new track “Call of The Wild” and a number of cover songs. The group members seem to have settled on opening their set with “Turn It Up” and closing it with “All Time Sleaze”, and that was once again what they did. However, the rest of the setlist was quite different from the last time that I saw them perform live at The Casbah in Hamilton, Ontario back in August 2019. It was a real treat to hear “Too Hot To Handle” — which video premiered on Sleaze Roxx earlier this week — as well as “Toxic Tears” from the group’s album Border City Rebels. The standout track for me was likely “Call of The Wild” which has a great chorus and really showcases Snow‘s amazing vocal abilities.

The boys in Love Razer tracked two demos over the weekend, but Metal Mike dishes the dirt on how it really went down…————————————–…