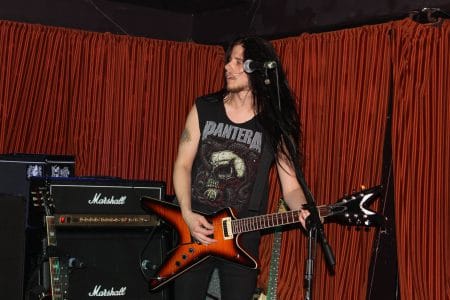 Sleaze Roxx stated the following in its review of Border City Rebels: “I cannot speak highly enough of Border City Rebels. For a debut album, it is a top notch effort that has just the right amount of modern versus ’80s hard rock nostalgia to it. If you like Mötley Crüe or Guns N’ Roses, then you are going to love Löve Razër. Everything about the album feels well planned and professional. The songs are great, the instruments sound terrific and the packaging and artwork are superb. Let’s not dwell on the fact that the song lyrics in the booklet are in a different order than the final track listing or that there are only eight songs on the album. Ultimately, that will only make you want more.

Sydney Snow‘s vocals really suit Löve Razër‘s style of music and he implements a lot of variety into the delivery of the lyrics. Often during the songs, he will switch from a raspy voice to falsetto to full on squeals and I would sometimes find myself on the edge of my seat just waiting for his voice to blow out. He sounds like he is singing right on the edge of his abilities and that in itself is exciting. Micky Bonez‘s guitar playing shines across the whole album,. His style is clean, solid and simple. It’s good to hear a guitarist that doesn’t over do things for the sake of being technical. It’s also good to hear a guitarist that can actually play some great solos and melodies in this day and age, when everyone was fearing that the art of guitar playing was dead. Metal Mike‘s thundering bass provides the perfect bottom end foundation for Löve Razër‘s songs and his rhythm section partner, Crissy Stixx‘s drumming is simply perfect. Of note, the drumming and patterns on “Partied Out Freak” are phenomenal.”