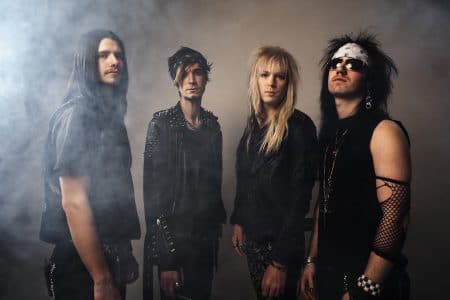 Speaking exclusively to Sleaze Roxx, Löve Razër bassist Metal Mike was asked whether the video teaser is with respect to a new single titled “Call of The Wild” or a new album with a release date of spring 2020. Metal Mike replied: “BIG plans for the spring, but until it’s confirmed we can’t tell you exactly what. “Call of The Wild” is a song title. Maybe it’s an album title too. You’ll just have to wait and see. Our oath to Sleaze Roxx is you will definitely get the inside scoop when all systems are go. We haven’t been playing any shows to allow ourselves time and space to write new material, and we’ve never been more excited about what’s coming out of the speakers.”

Back in February 2016, Löve Razër released a humorous video titled JD Outtakes to celebrate winning the Canada wide Jack Daniels Supporting Act Contest. In regard to why it’s been so long since Löve Razër incorporated comedy in one of their videos, Metal Mike advised: “Good point, it actually wasn’t intentional but from the footage I captured, I was laughing… How could I not share some laughs with everyone else? It’s true when it comes to our sound and music, we take it seriously but that doesn’t mean we don’t have a good time when we get together.”

In terms of the direction of the band’s new material, Metal Mike indicated: “For these new songs we turned the gain to 11. It’s a complete throwdown compared to anything else. It’s heavier, tighter, just straight up more in your face. Get ready to headbang.”

The boys in Love Razer tracked two demos over the weekend, but Metal Mike dishes the dirt on how it really went down…————————————–…