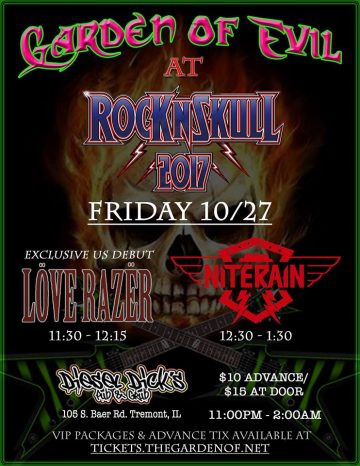 Canadian sleaze rockers Löve Razër will be making their US debut at Garden Of Evil‘s Rock N Skull Festival after party show on October 27, 2017. They will share the stage that night with Norway’s NiteRain.

The Rock N Skull Festival line-up for 2017 is a stellar one with Don Dokken headlining the first “acoustic” night, Steel Panther headlining day two and the one and only Ace Frehley headlining day three.

Löve Razër have emerged as a relentless touring machine across the province of Ontario in Canada following the release of their EP Rock ‘N’ Roll Addiction, which finished at number five on Sleaze Roxx’s Top Ten Albums of 2016. The band’s first single “First Class Bitch” also finished among the Sleaze Roxx’s Ten Great Songs of 2016 (thus far) released back in August 2016.

Speaking exclusively with Sleaze Roxx, Löve Razër‘s bassist Metal Mike commented on how the sleaze rockers ended up landing the gig at Rock N Skull‘s after party on October 27th: “We are extremely excited to rock Illinois in October! We were lucky enough to have the Garden Of Evil reach out to us asking if we were interested. The answer was an easy yes. They knew we were from Canada when they asked us to play (which was my first concern) but they have really lit the fire as far as getting everything 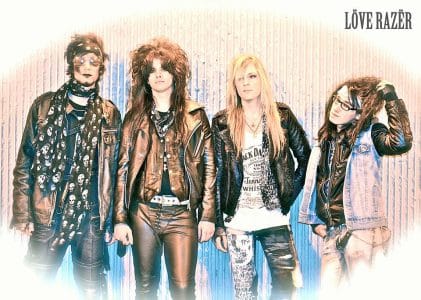 good to go so we can play for our fans across the border.”

In terms of whether Löve Razër‘s relentless touring across the province of Ontario has paid dividends, Metal Mike opined: “It has certainly paid off — not literally in terms of money [laughs] — but we have learnt a lot from playing relentlessly across Ontario. We have gained many fans, met some amazing people, played some killer shows and it has prepped us into being a step ahead as far as being professional goes — including smooth load ins, changeovers, tight shows, dealing with promoters, etc. These are things you don’t want to find out on your first “big tour.” And of course, we have learnt a few of the what to and what not do’s of the road. For example, don’t eat random Chinese food! Maybe one day, the video will surface of what happens when you do [burst out laughing]. We have a lot of big things ahead and we can’t wait to see what happens!”