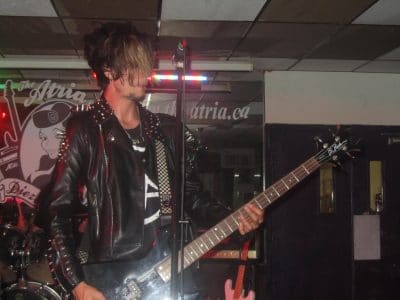 Canadian sleaze rockers Löve Razër are scheduled to play a number of gigs throughout Eastern Canada for the rest of 2016 including opening for Gilby Clarke in Windsor, Ontario on September 15th and for the BulletBoys in Toronto, Ontario on October 5th.

Löve Razër will be logging the miles (or kilometres) to play these various gigs given that some of their tour stops are more than an eight hour drive from their hometown of Windsor, Ontario.

Sleaze Roxx stated the following in its review of Löve Razër‘s concert at The Atria in Oshawa, Ontario, Canada on August 18, 2016: “There is something to be said for creating your own opportunities and making a name for yourself through your relentless hard work. The new Sunset Strip like sleaze rockers, Löve Razër, are a prime example 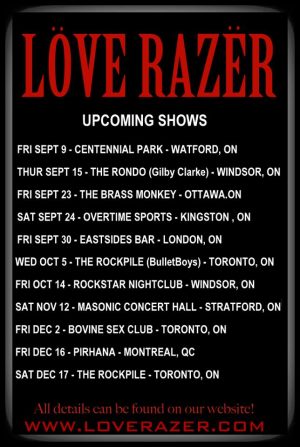 booking their own headlining gigs throughout the province of Ontario (in Canada) and beyond, and essentially making things happen for themselves rather than waiting to open for the next big band that comes their way. For that reason alone, the group has my respect… I also had the chance to speak to the group’s affable bassist Metal Mike who advised that the band was trying to book gigs from Thursdays to Saturdays and around the band members’ work schedules. Taking into account that Löve Razër are based out of Windsor, Ontario, which is just across the border from Detroit, Michigan for all you Americans out there, the amount of driving that Löve Razër have to do for most of their gigs is impressive. Oshawa would have been at least a five-hour drive and especially since the group would have had to go through the always busy Toronto highways. The group is already booked to play at the Brass Monkey in Ottawa, Ontario on September 23, 2016 (check out their upcoming tour dates), which would likely be about a nine-hour drive from Windsor. Clearly, this is a group intent on making things happen for themselves.”

Sleaze Roxx concluded the following in its concert review: “I have to give credit to those guys. You could not tell if there was one person, 20 people, 200 or 2,000 in the audience because the band members put on a spirited energy filled set as if there were thousands attending. Having missed the glory days of the actual Sunset Strip days back in the ’80s, it seems that Löve Razër are the closest that I will get to experiencing that vibe, at least in Canada that is!”

Love Razer – Partied Out Freak: Live at the Atria, Oshawa

Decibel Geek Podcast Presents:Love Razer: Partied Out Freak Captured live at The Atria in Oshawa, Canada by The MeisterSubscribe to this Decibel Geek YouTube…