Great news for Löve Razër fans as the Canadian sleaze rockers will be releasing a new album sometime before the end of the year. 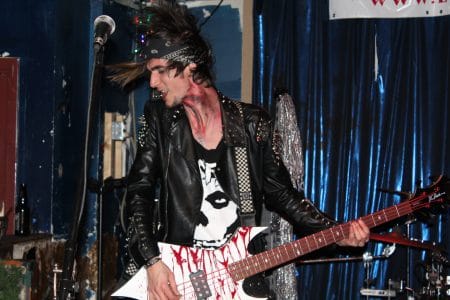 Löve Razër bassist Metal Mike was recently interviewed by The New Wave of Hair Metal and was asked whether there was an official release date yet for the group’s new album. Metal Mike replied: “No official date, but it’s going to be a 2017 release.”

Metal Mike was also asked who was his biggest influence as a bassist and how much of an impact did they make on his musical career. The bassist advised (with slight edits): “Cool question man! Truth is I didn’t start playing bass until I met Bonez three years ago.. I was a guitar player but he had an ad online and I figured why not try some bass, I borrowed a bass from a coworker and after getting together to jam with Bonez he blew me away! So he inspired me to start playing bass because what we were doing only required 1 guitar player..I really enjoy it!! But my role models in the industry are definitely Nikki Sixx and Todd Kerns. Nikki is why I even wanted to try playing bass…I admire all of his accomplishments and the first song I learnt on bass was “Dr.Feelgood,” I won’t forget how cool it felt. Todd Kerns is definitely my favorite player tho, from his tone, his riffs and style, he makes me want to be the best I can be for Löve Razër. He also happens to play on probably my all time favourite album: Slash – World on Fire.”

You can read the rest of the interview with Metal Mike at The New Wave of Hair Metal‘s Facebook page.