Canadian sleaze rockers Löve Razër consisting of lead vocalist Sydney Snow, guitarist Micky Bonez, bassist Metal Mike and drummer Crissy Stixx are working on new songs this winter for a new album release in 2020. In addition, the group is asking its fans for help in selecting which of four songs off its current studio album Border City Rebels should be next to receive the video treatment. 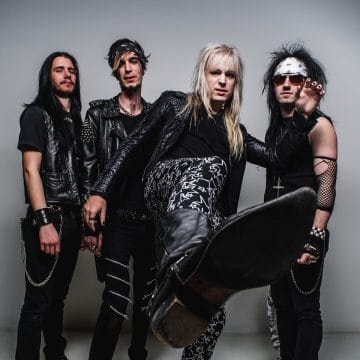 Help us pick which song is so ? fire ?, it deserves to be the next video:

a. Too Hot to Handle
b. Trip to Nowhere
c. Lifeline
d. Toxic Tears

If you need a reminder, go listen on Spotify: https://spoti.fi/2krJmxC

We’ll count your favourites on Friday! Go put your votes in the comments below ?? now!”

Sleaze Roxx stated the following in its review of Löve Razër‘s album Border City Rebels (which finished at #14 on the Sleaze Roxx Readers’ Top 20 Albums of 2018):

“Sydney Snow‘s vocals really suit Löve Razër‘s style of music and he implements a lot of variety into the delivery of the lyrics. Often during the songs, he will switch from a raspy voice to falsetto to full on squeals and I would sometimes find myself on the edge of my seat just waiting for his voice to blow out. He sounds like he is singing right on the edge of his abilities and that in itself is exciting. Micky Bonez‘s guitar playing shines across the whole album,. His style is clean, solid and simple. It’s good to hear a guitarist that doesn’t over do things for the sake of being technical. It’s also good to hear a guitarist that can actually play some great solos and melodies in this day and age, when everyone was fearing that the art of guitar playing was dead. Metal Mikes thundering bass provides the perfect bottom end foundation for Löve Razër‘s songs and his rhythm section partner, Crissy Stixx‘s drumming is simply perfect. Of note, the drumming and patterns on “Partied Out Freak” are phenomenal.

I will go as far as saying that if Judas Priest hadn’t released Firepower this year, Löve Razër‘s Border City Rebels would be at the top of my 2018 favorites’ list. And maybe with a bit more time and a few more rotations, it might actually make it to the top.”