Kivel Records has signed a “new” band by the name of Love & Revenge who will be releasing their debut album Karma on April 4, 2017. 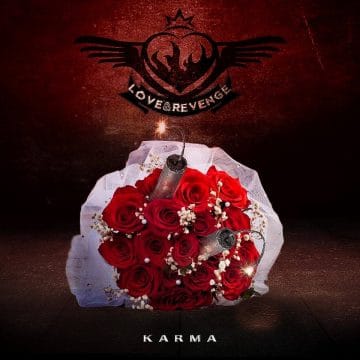 “Ok folks!!! Some news from the Kivel Records Desk!!!

We’ve always prided ourselves on Quality vs Quantity. There are plenty of other outfits out there to meet that demand. We want to focus on being selective with our bands, product and sound. In order to make sure we can offer the listener the best that Kivel Records has to offer.

With that said, we are happy to offer you something that is NEW to the Kivel family, while at the same time someone from our past. We always try to leave the door open for some of our artists that have moved on to other things. Life has a funny way of working out and sometimes new paths lead to previous destinations.

Now before we announce “who” this is, let me preface this with, music is sometimes about channeling emotion and feelings. Which can range from happy and sad to frustration and anger. All making ingredients for an art that is driven not only by talent, but passion.

So, what better name for a band than wearing two powerful emotions on it’s sleeve. So, we are happy to announce a band that we promise will not disappoint fans of arena guitar driven rock!! 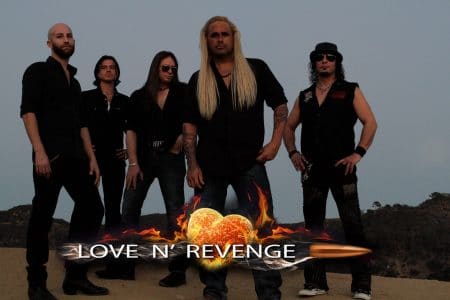 Ladies and Gentleman, I give you…… LOVE & REVENGE.

The new album KARMA is due April 4th on Kivel Records. Produced and mixed by musical mastermind Vic Rivera who delivered something that is nothing sort of sonic ear candy for the lovers of this genre. Proving once again that his talent as a musician is rivaled by his abilities as a great producer. Which he has left his distinctive sonic fingerprint on this great slab of music.

Of course, when having a meeting of elements such as, songs, band and producer. You need that guitar “hero” to complete the equation. John Lisi is nothing short of that title, and quite deserving we might add. All these ingredients combined = arena guitar driven rock at it’s finest.

Also…please note that anyone that pre ordered this release through Damon Kelly. Kivel Records will be honoring those pre orders on behalf of the band.

We will unveil the artwork later today. Monday expect to hear a song sample. Including pre order details”

Damon Kelly is no stranger to Kivel Records as the singer’s band Rockarma released the album Bring It in 2008 via the record label. In addition, the band Love N’ Revenge, whose name was apparently slightly changed to Love & Revenge, dates back to at least 2013 as can be read from the following Bio on Love N’ Revenge‘s Facebook page: 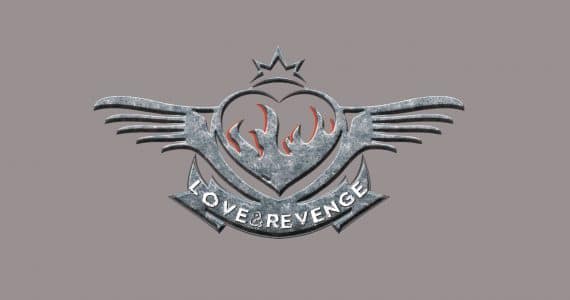 “DAMON KELLY – Frontman, Primary Songwriter, and International Recording and Touring Artist – the Mastermind behind his brainchild Rockarma, led the band to two extremely successful album releases worldwide with massive radio play and media attention. The debut album garned 8 – Best of 2005 Awards for Songwriting, Production and Guitar Work – Produced by Guitarist from Multi-Platinum Selling Artists FIREHOUSE. In 2008 Damon Kelly‘s Rockarma was signed to New York Based Record Label Kivel Records with the release of “Bring It!” – which made a huge impact around the globe and took Rockarma out on the road sharing the stage with Vince Neil, Bret Michaels, Queensryche, Tesla, Dokken, Firehouse, Jackyl, Y&T, Slaughter, LA Guns, etc… The sophomore effort also got signed to Japanese Based Label Spiritual Beast Records.

Damon Kelly also got exclusive interviews and media frenzy with such magazines as Burrn Magazine (Japan), All Access Magazine (LA) and Fireworks Magazine (UK). This was only the beginning in Damon Kelly‘s eyes as the spark of creativity was only being ignited and Damon‘s passion and undying loyalty to his fans, industry and the entire music scene would only bring on what the world is about to experience…Damon Kelly unleashes the release of “LOVE & REVENGE” – working with Multi-Platinum Selling Artists and Biggest Rock Legends of all time, with a few surprises along the way…13 tracks of hit after hit no filler, from the heart-wrenching ballad to the arena fist-pounding anthem to the cover re-make…DAMON KELLY’S “LOVE & REVENGE” will without a doubt put his stamp in the international music scene with Pure Guitar Driven Melodic Arena Rock..get your copy of one of the hottest releases of 2013 today at www.lovenrevenge.com!!! See ya on tha Road!