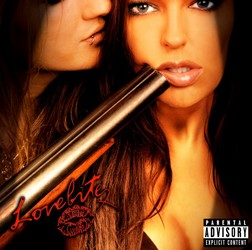 The powerful and boisterous group formed by virtuosic frontman Jonny Sparks boasts a striking visual presence and hedonistic reputation rivaled by few. Lovebite’s music is complex and gritty, with a solid hard driving base — they are dark, sleazy, dirty and powerful… everything that good rock should be.

Having established themselves in record time as one of the UK’s premier up-and-coming glam/sleaze bands with their heart-pounding and high-minded debut album ‘Lock ‘N’ Load’ — available for purchase at lovebiteofficial.com — Lovebite deliver an uncharacteristic fusion of hard, thrashy guitars and unique songwriting techniques, with a limber rhythm section that keeps the music loose yet powerful… and HIGHLY addictive.

With the zeitgeist dictating that the relevance of an album as an art form is under close scrutiny, debut album ‘Lock ‘N’ Load’ is a superlative, rip-roaring triumph that simply must be experienced from start to finish.

Tough yet full of intricate textures, played by musicians at the top of their game, this is the kind of record that will make its mark at a time where raw, ugly rock & roll is crashing back. A sleazy cocktail of tracks leaves you hungry for more — with high-octane, hook-o-rama songs like “Sin City” blended with the raw, unchecked emotion of “Mr. Lonely”… the heavy power ballad “Can’t Fight Your Love” is juxtaposed with the mellow yet irresistible “Hey Baby”. There’s an element of aggression with the catchy “Love/Hate” and some rugged sleaze in the driving bassline on “Striptease”.

The heat, intensity, power and dynamism you’ll uncover from the music is paving the way for Lovebite to take the rock world by storm — these new boys on the block are in the fast lane and nothing will hold them back, they’re locked, they’re loaded, and they’re ready to make some noise.