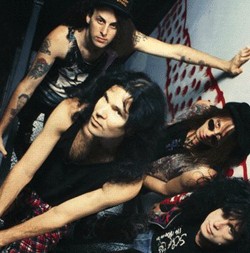 Love/Hate have completed a new studio album called ‘Crucified’, but original guitarist Jon E. Love is not impressed and even suggested he is ready to take legal action against singer Jizzy Pearl.

The musician took to Facebook to vent about the upcoming Love/Hate album. “This is not a Love/Hate record,” claimed Love. “Jizzy has taken it upon himself to release his solo shit and call it Love/Hate. None of the original members are on it. How do I know this? Because the idiot isulted me when asking me to perform on it. Any true Love/Hate fan will immediately know it’s not the real band. Stayed tuned, more to follow as I proceed to sue him.”

Due for release in January of 2014, ‘Crucified’ represents the first Love/Hate record of all-original music in years. The only remaining original member of Love/Hate, singer Jizzy Pearl, takes the ‘old’ out of ‘old-school’ and delivers songs that sound every bit as classic as the classic Love/Hate songs fans have grown to love. The album release will be followed by a UK tour in March

“Michael and I are from a different era,” said Pearl during the recording of ‘Crucified’, “Before Protools, before Napster, tinkering with a familiar yet somehow forgotten formula, a good song that sucks you in with a great chorus. Love/Hate always had great songs and that’s a tradition I intend to keep up with this record. It’ll be almost 25 years since ‘Blackout In The Red Room’ was recorded… wow. I will say the songs sound very good, I am pleased and soon I can abandon songwriting for a while and return to my Unibomber shack until I re-emerge for Spring release and UK tour.”

Meanwhile Love is writing and recording a new Jon E. Love & The Haters album, also slated for an early 2014 release.