Theatrical rockers Lipstick have made their new song “Fight Back” from their sophomore studio album Lipstick II available for a free download for the rest of the month of April 2017 in order to help spread awareness about child abuse. 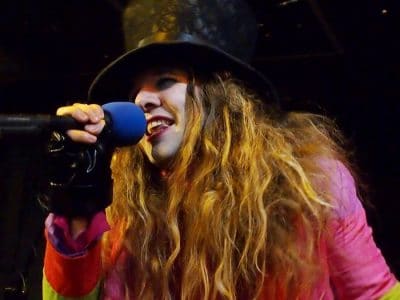 As part of National Child Abuse Prevention Month, Lipstick is offering a free download of their new song “Fight Back” to help spread awareness about child abuse. The band issued the following statement:

Lipstick is, for the most part, a fun and light-hearted band. Life, however, is complex, and there are important issues to talk about. April is National Child Abuse Prevention Month, and Lipstick is wanting to spread awareness of this issue. It’s not just because I’m a former victim of physical, mental and sexual abuse at the hands of my stepfather. It’s because no child deserves to be abused, and from personal experience, I found that the best way to stop child abuse is to spread awareness.

So, for the month of April, we’re offering a free download of our song “Fight Back”, an anthem against abuse, and we humbly ask that you share the song and spread it around. Let your friends know that it’s National Child Abuse Prevention Month. Donate to a good charity like the Nashville Children’s Alliance and please, report any suspected child abuse. Spread the word, please.

“Fight Back” is from the band’s latest album, Lipstick II. Lipstick II features a wide array of guest musicians on the album, including Billy Morris (Warrant/Quiet Riot), Tom Pappas (Superdrag), Jace McLain (Nuclear Bubble Wrap), and the narrator of the English version of Dragonball Z, Kyle Hebert. The album was released on January 25th, 2017. The band is also performing a charity show for the Nashville Children’s Alliance on April 9th, 2017 at The Country in Nashville, TN….

Lipstick is a theatrical rock band based in Nashville, TN. The band is a musical collective led by two core musicians, Greg Troyan (vocals) and Stephen Smith (bass) with a large number of backing musicians filling out the rest of the lineup. The band is known for epic stageshows driven by catchy, optimistic, hard rock.

Sleaze Roxx stated the following in its review about Lipstick II and in particular the track “Fight Back”: “There are really only a handful of good songs on Lipstick II. The first song “Fight Back” is the best by far. Built on a solid and catchy guitar riff, it seems it’s the only one that I really pine to hear on the whole album.”