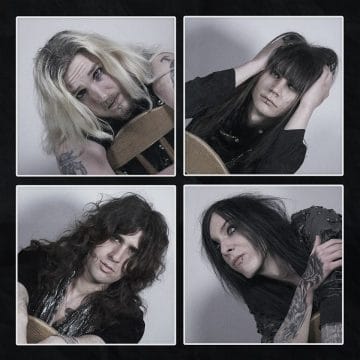 Swedish rockers Lustboys of Eden consisting of lead vocalist Lizzy Dollz, guitarists Max Lindahl and Stone Sinna, and bassist Jim Cripple have released a second video and this time for the song “Cyanide.”

Lustboys Of Eden‘s “Biography” on their Facebook page states (with slight edits):

“Sick and tired of todays landscape of fake DJs, soul-less music and over edited tracks Max Lindahl teamed up with Jim Cripple to form a rock n roll band. First choice on guitar and vocals was easy, bringing former bandmates of Blackout Express back together, as Stone Sinna and Lizzy Dollz joined in on the action.”

According to its Facebook page, the group is ‘about’ “Taking a stand for rock n roll and bringing musicians back into music.”

“Somewhere between Aerosmith and The Sweet, Sparkle Kick is pure classic rock made of French and Swedish blood.”