Lynch Mob did not waste any time getting a new lead vocalist after the departure from long-time on and off Lynch Mob singer Oni Logan. Blonz singer Nathan Utz made his debut as lead vocalist for Lynch Mob at a concert at the Medina 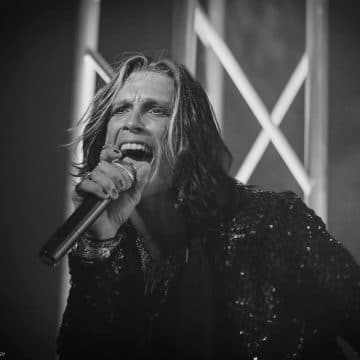 Entertainment Center in Medina, Minnesota, USA on March 9, 2018 and sang again for the group at the Surf Ballroom in Clear Lake, Iowa on March 10, 2018. Warrant‘s Robert Mason had filled in on lead vocals during a number of shows including the ’80 In The Park Festival and the Monsters of Rock Cruise in the interim.

According to his Facebook account, Utz is from Mechanicsville, Virginia, USA and currently lives in Atlanta, Georgia, USA.

Wikipedia states that Blonz released one self-titled album in 1990 and states the following about the band: “Blonz was a glam metal band from Atlanta, GA that formed in 1986. They were signed by Lenny Petze (Cheap Trick/Boston) in the wake ofglam metal’s explosive popularity, recorded one album for Epic Records, and then disappeared. The album was recorded at Southern Tracks studio in Atlanta, produced by Steve Walsh and Phil Ehart of the band Kansas, and engineered by Brendan O’Brien.” The group consisted of Nathan Utz on vocals, Steve Taylor on guitars, Dennis Ogle on guitars and keyboards, Michael Fandino on bass and Aaron Tate on drums and percussion.

Lynch Mob at the Medina Entertainment Center from 3/9/2018 with Nathan Utz on vocals! (his first show with Lynch Mob) My camera died at the end of Wicked, al…

Lynch Mob plays their hit “Wicked Sensation” Live @ The Surf Ballroom in Clear Lake, Iowa on March 10, 2018! What a great show with Nathan Utz on vocals!