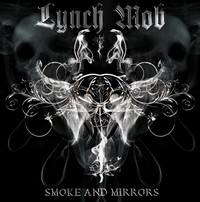 Lynch Mob is getting ready to embark on a summer tour in support of their current release “Smoke and Mirrors” on Frontiers Records. The band line-up for this tour consists of George Lynch (shred master), Oni Logan (vox), Michael Devin (bassologist) and Brian Tichy (time-keeper).

After seventeen long years singer Oni Logan and guitar wizard George Lynch found their way back together and again show their amazing abilities in some killer new Hard Rock songs.” I would say this new record “Smoke and Mirrors”, is the record we should have put out as a follow up to “Wicked Sensation”…better late than never I guess…”, says Lynch presenting the new record.

Get back to real Rock with Lynch Mob’s new album “Smoke and Mirrors” – For more information visit www.georgelynch.com or www.myspace.com/lynchmobrocks.