Lynch Mob have released a video for the song “Testify” from their upcoming new album Rebel, which will be released on August 21, 2015. 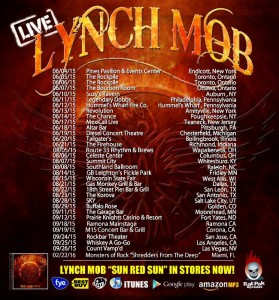 The “Testify” video follows the release of the video for the track “Automatic Fix” from the forthcoming new record.

Lead singer Oni Logan stated the following about “Testify”: “This song to me is very traditional in its approach, but electrified with its heavy riff guts and blues all rolled up in grease. A testimonial soulful song. The walk we all must go on is a long and winding road as mentioned in the lyric.”

Sleaze Roxx commented as follows about Lynch Mob‘s prior release in December 2014: “Sun Red Sun is a hit and miss affair, however the good tracks are worth the price of the EP alone — and some new original material from Lynch Mob is better than nothing.”

Lynch Mob are currently on tour with tour dates listed on the enclosed poster.