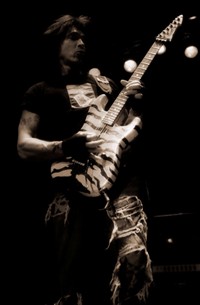 The re-formed Lynch Mob, featuring George Lynch, was set to begin their summer U.S. tour on Friday, July 29th in Houston, Texas. It was a surprise to the Texas crowd when the dynamic band showed up without singer Oni Logan who decided to sit this tour out at home. Chris Romero was quickly flown in to handle vocal duties on the first two dates of the tour, while Chaz West of Bonham will now be replacing Logan on this tour.

The band released the following statement: “Oni let the band and our fans down. He quit the band at 5:30 am before our 7:30 am scheduled flight. He left us high and dry and did not fulfill his commitment. We are saddened and disappointed – but as a band, we are committed to honoring our obligations.” Lynch also stated that he plans on emulating the vocals with his guitar, if necessary!

Replacement vocalist Chris Romero tells Sleaze Roxx, “The Lynch Mob tour was set to go and two hours before the guys were getting on the plane, Oni quit. The band felt obligated to to perform for the fans and bass player Robbie Crane (of Ratt), who played in my solo band Romero, told George Lynch about me. Basically, I got a call on Friday morning — I was half asleep and I thought Robbie was joking, next thing I know George has me on a plane from Denver to Houston!

I started working on the songs at the hotel and soundcheck — we did a lot of Dokken tunes, since I was more familiar with that, and by Saturday we worked in more Lynch Mob tunes. The crowd in Oklahoma was very cool and receptive, it was kinda like the movie ‘Rock Star’. George Lynch has been a hero of mine since I was in high school, so it was pretty surreal to be onstage singing “Breaking The Chains’, “Tooth And Nail”, etc. Oni let the fans and the band down, but they were set on honoring their obligations… George is a very cool dude and it was an honor to sing with him. The entire band made me feel welcome — it was pretty awesome.”

As previously announced, Lynch released his new solo album, ‘Kill All Control’, on July 19th through Rocket Science, Inc. This much-anticipated album is the eleventh in his nearly twenty year career. It began as a follow-up to the Souls of We debut, ‘Let The Truth Be Known’, however, Lynch quickly realized the project was taking on a new direction with the addition of Powerman 5000 drummer, Adrian Ost. In collaboration with Souls of We singer, London LeGrand (Brides of Destruction), Lynch noted that, “the creative juices just flowed and we wrote most of the CD in 10 days.”

In 2009, Lynch re-formed Lynch Mob and released ‘Smoke and Mirrors’, which resulted in an extended tour and the reuniting of the band’s original line-up, to the delight of many fans. Lynch Mob is currently working on a new album, due out later this year.

Lynch came to fame in the 1980s through his work as the lead guitarist in the band Dokken. Dokken had a string of successful platinum albums including ‘Under Lock and Key’ and ‘Back for The Attack’, both of which featured Lynch’s inventive and intricate guitar work.