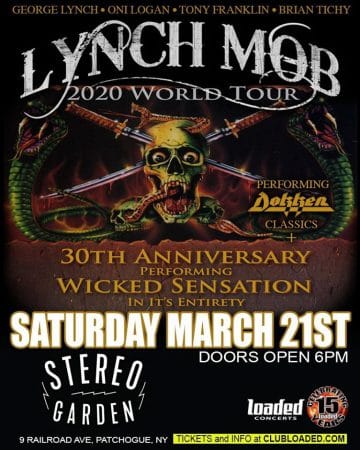 Lynch Mob featuring guitarist George Lynch and lead vocalist Oni Logan along with bassist Tony Franklin (The Firm) and drummer Brian Tichy (Whitesnake, The Dead Daisies) will be embarking on a 2020 World Tour where they will celebrating the 30th year anniversary of the group’s debut album Wicked Sensation by playing it in its entirety along with some Dokken classics.

One date has already been announced at the Stereo Garden LI in Patchoque, New York, USA on March 21, 2020.

Back on December 29, 2019, Sleaze Roxx had announced that Logan had hinted that he was back in Lynch Mob for 2020.

Wikipedia states the following about Wicked Sensation (with slight edits): “Wicked Sensation is the debut album by American rock band Lynch Mob. This was George Lynch‘s first release since leaving Dokken. Singer-songwriter Oni Logan provided vocals, contributed to the lyrics and composition and also played harmonica. Also joining George was former Dokken drummer Mick Brown. The album had two successful singles, with “River Of Love” climbing to the #19 spot on Billboard‘s Mainstream Rock chart as well as “Wicked Sensation” reaching #31 on that chart.” 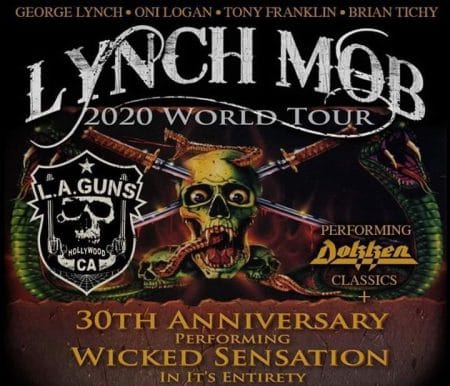 Copyright Disclaimer Under Section 107 of the Copyright Act 1976, allowance is made for “fair use” for purposes such as criticism, comment, news reporting, t…