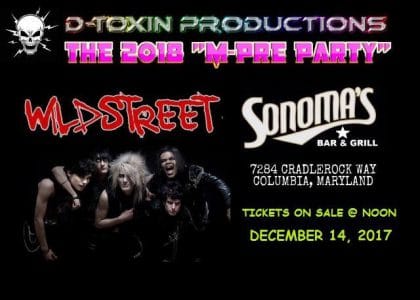 The M3 Rock Festival has yet to announce its line-up or dates for 2018 but that hasn’t stopped the premiere warm-up festival event, the M-Pre Party, from announcing its line-up tonight.

This year, the M-Pre Party, which is arranged by D-Toxin Productions‘ principal Dave Dillman and is in its ninth year, will have the following bands: Wildstreet (performing for the third time), Mad Margritt, White Trash Stars, Shokker (for the second year in a row) and Babylon Shakes (whose frontman Chris Clark is playing the event for the third time).

The 2018 M-Pre Party will take place on the Thursday before the M3 Rock Festival at Sonoma’s Bar & Grill in Columbia, Maryland, USA.

Wildstreet are led by their frontman Eric Jayk and they will be releasing a new single titled “Raise Hell” in two days (on December 15, 2017). Sleaze Roxx conducted an interview with Jayk back in early 2017. The group’s “Biography” on its Facebook page states:

“Wildstreet began in 2006. Over the course of the next 7 years, the band released two EPs & two music videos which have received well-over 3,000,000 youtube views. Wildstreet’s songs have appeared on National/International TV networks including: MTV, VH1, Oxygen, TBS and in a THQ Video game. The band toured non-stop from 2009-2013, and appeared at the largest US music festivals: including SXSW, M3 rock festival, and headlined the side stage at Rocklahoma for 5 years straight. The band was also their region’s winner in the Best Buy/Ernie Ball Battle of the Bands for Rockstar Energy’s Uproar Festival, sharing the bill with Avenged Sevenfold, and Three Days Grace. They opened for a number of well-known bands including The Bouncing Souls, Twisted Sister, Michael Monroe, Crashdiet, Kix, LA Guns.

In 2017, Wildstreet has performed select US dates, returned to Rocklahoma to headline the sidestage for the 6th time. They are currently working on their long-awaited new full-length release, due out in 2018.”

Just like Wildstreet, Mad Margritt are led by their long-time frontman Eddie Smith. Mad Margritt hail from Atlanta, Georgia, USA and have already released six albums including Love, Hate and Deception back in September 2016 via Perris Records. Sleaze Roxx did an interview with Smith back in late October 2016 that included the frontman discussing each of the group’s albums. 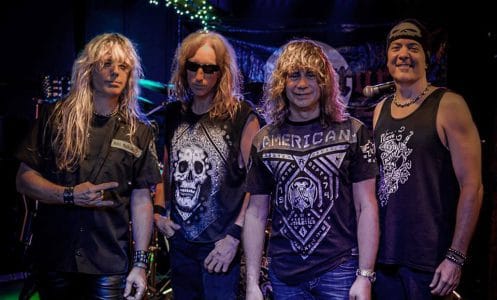 Sleaze Roxx stated the following in its review of Love, Hate and Deception: ‘Instantly likeable — that is a nutshell the best way to describe Mad Margritt‘s new album Love, Hate And Deception. If you are longing for some classic ’80s era tunes with an updated fresh sound, Mad Margritt are just what the doctor ordered for you! I’ve known of the name Mad Margritt for some time given that my predecessor Skid covered them regularly on Sleaze Roxx since 2005 but this was the first time that I really listened to them. All I can say is “Wow!” It’s like finding a treasure right in your own backyard. You didn’t know it was there but upon reflection, you wonder how come it took so long to find this treasure that was right underneath your nose the whole time.

Mad Margritt simply provide some easily enjoyable hard rocking tunes. The tandem of singer Eddie Smith and guitarist Mark Cook have come up with some guitar heavy tunes, which are highlighted by or feature the very strong vocals of Mr. Smith. Drummer Tod Williford and bassist Matt Aebi provide the rock solid foundation for Cook and Smith to really shine — and shine, they certainly do.” 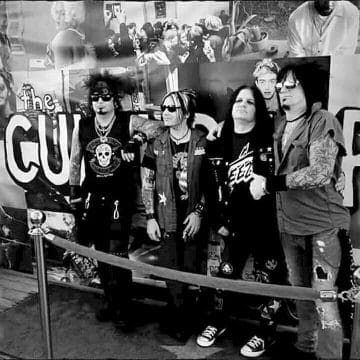 White Trash Stars describe themselves as follows on Reverbnation: “☆ ☆ ☆ A Little Bit o’ sLeAzE, a Touch of Trash and a Whole Lotta Rock & Roll ☆ ☆ ☆ We Do What We Want; You Want What We Do…Get Your Trash On! ☆ ☆ ☆”

The band consists of Caz F on vocals, Ray Ray D on guitars, Mal Hyde on bass and E-Money on drums.

Chicago, Illinois, USA heavy metal rockers Shokker are returning for a second year in a row to the M-Pre Party. The female fronted group is led by guitar wizard Casey Tremont and the powerful and soaring vocals of lead vocalist Rachl “Raxx” Quinn. The group has been around for at least seven years but had difficulties finding the right singer until Quinn came along in or about 2015. Sleaze Roxx interviewed the group back in late September 2015 after it released its three song debut EP Shokker. Fast forward to last year’s M-Pre Party and Shokker released around that time its full-length album III.

Sleaze Roxx stated the following in its review of III: “The New Wave of Traditional Heavy Metal — another seemingly “new” term that is surfacing as ’80s hard rock and heavy metal continues its renaissance. Shokker may well be the prototype band to carry the flag of The New Wave of Traditional Heavy Metal as their debut full-length album is simply fantastic straight up classic heavy metal with a powerhouse female singer.

As I started listening to Shokker‘s debut full-length album III, all I could think was potential, potential, potential. It’s also what I was thinking when I first heard Shokker‘s self-titled EP about one and a half years ago except that at that time, I did not think that Shokker had truly tapped into and harnessed their potential. There were some kinks to fix including reigning in guitar virtuoso Casey Tremont, who perhaps if left to his own devices would have delivered an over the top guitar shred fest like superbly gifted guitar maestro Vinnie Vincent did on Vinnie Vincent Invasion‘s self-titled debut album. The good news is that this time, Shokker have lived up to and harnessed their potential as Tremont (or perhaps the rest of the band) has pulled the brakes on his guitar shredding to give us tasty snippets at the appropriate times on III rather than killer shredding firing occasionally at the wrong times like on the band’s debut self-titled EP.”

Babylon Shakes may be a relatively new band with only two songs released to date but their frontman Chris Clark is no stranger to the M-Pre Party given that his previous band Last Call Messiahs played the M-Pre Party in 2014 and 2017. Last Call Messiahs‘ debut four song self-titled EP landed the #9 spot on the Sleaze Roxx’s Top Ten Albums of 2014. 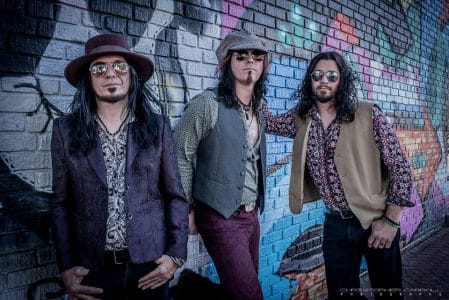 Sleaze Roxx was the first to interview Clark after he announced the formation of Babylon Shakes back in August 2017 and the singer stated as follows about the difference between Last Call Messiahs and Babylon Shakes:

“Babylon Shakes is much more trashy, bluesy, punk, funk rock n’ roll. It’s more organic and less metal. Its all me, completely uncompromised and straight from the heart. I got really inspired again hanging out in Hollywood last year and hearing some darker early ’80s stuff like Motorcycle Boy, The Joneses and X. My walls at home are covered with pictures of early Aerosmith, Hanoi Rocks and Guns N’ Roses. When I play guitar, it’s much more Steve Jones than Steve Vai. I felt like it was time to do something from my own perspective and my own point of view as an artist and not compromise that through collaboration with three or four other people. In a band setting, it’s easy to try and hear the finished product when you are writing, so you anticipate how the song could get changed or the arrangement switched around based on everyone else. So for this project, i just wanted to hear my ideas from start to finish.”

Babylon Shakes performing “Velveteen Libertine” at the Sleazy Slimey Series at the Cancun Cantina in Hanover, Maryland, USA on December 10, 2017: