M3 Rock Festival organizer Eric Baker was interviewed by Mitch Lafon for the Rock Talk with Mitch Lafon podcast and spoke about the “controversy” with having L.A. Guns featuring drummer Steve Riley and bassist Kelly Nickels playing instead of the L.A. Guns version featuring singer Phil Lewis and guitarist Tracii Guns. The M3 Rock Festival takes place at the Merriweather Post Pavilion in Columbia, Maryland, USA from May 3 to 5, 2019. 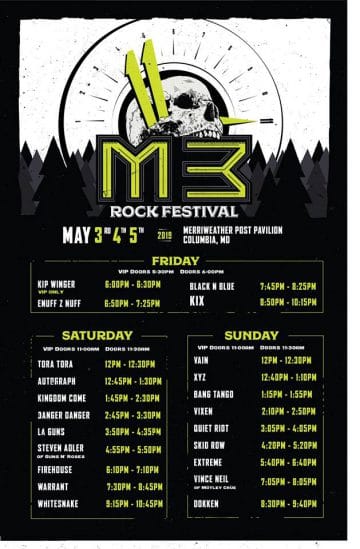 Just a couple of days earlier, Lewis explained via a Facebook post that he was unhappy with the M3 Rock Festival not clarifying which L.A. Guns version was playing.

Baker was asked whether he wanted to address the L.A. Guns situation and whether it could be fixed to which he replied (as transcribed by Sleaze Roxx): “Yes. One, there’s definitely a way to say ‘Yes. let’s get back.’ And I’m going to reach out to those guys and have a conversation off line where this isn’t about e-mails and texts. So just have an adult conversation and say, “Hey listen.” I love Steve Riley just to let you know. Every time he’s been, when he’s in L.A. Guns, the times they played, they were always a pleasure to deal with. Ummm. Last year, these guys decided that they didn’t want to do the show and I don’t even know if the fans know why they decided they didn’t want to do the show. I never had a conversation with them. Ummm. And that’s why I need [inaudible], that’s why we need to have a conversation. And you know what, I think that the people want to hear the music of L.A. Guns. And yes, Steve and Kelly‘s been in the band. You know, it’s like, you’re going to hear the music of L.A. Guns and there is a way to fix this with Phil and Tracii.

I don’t even know if Tracii realizes this but I worked you know, I worked with L.A. Guns in Polydor back in the ’90s. You know, we spent time going to radio stations. Ummm. And the reason that I remember is that I was a young promotions guy and I loved L.A. Guns. It was a big deal for me. For him, it was probably, “Another promo guy taking me to radio.” Not in a pompous way. Just you meet so many people on the road. You have so many interviews to do. It’s not easy. Ummm. And so, I want to make this right with them. OK? And hopefully they want to make it right with us but right now, we’re excited to have Steve and I’m not discrediting those guys. I think they, you know, kind of knew what they were getting into. Ummm. And they’ve been nothing but gentlemen about it. They haven’t fired back. They haven’t said anything negative about Phil or Tracii. They’re just going to come out and play the show. Play the show and wow the crowd, and that’s what I hope happens and we can move on. You know, I hope that everybody gets along after this. I mean, I know Steve and I will, you know? And I hope Phil and I will. And I hope Tracii and I will. I hope that we all move forward and put it behind us because we’re all grown men. You know, let’s just fix it.”

You can listen to the interview with Kip Winger and M3 Rock Festival organizer Eric Baker by Mitch Lafon for Rock Talk with Mitch Lafon below.

On this episode of ROCK TALK WITH MITCH LAFON. New interviews with KIP WINGER and M3 Rock Festival organizer – ERIC BAKER. Trixter’s Steve Brown co-hosts. Before getting to our first interview Mitch and co-host Steve Brown discuss which bands should be invited to play the M3 Rock Festival in upcoming years.