Shortly after a poster with the M3 Rock Festival‘s 2019 line-up was released yesterday, the festival announced its line-up, which will include other bands to be revealed at a later date. 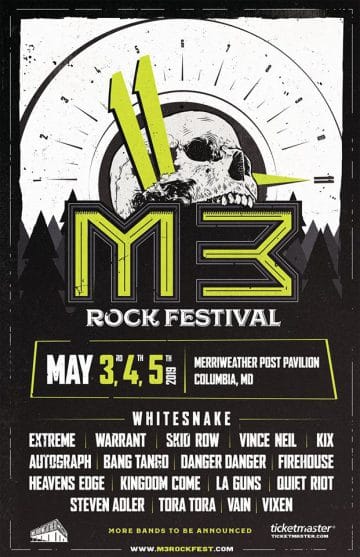 The only additional announced band for the 2019 edition that was not included in the initially leaked M3 poster yesterday is Vixen.

Of note, Steven Adler (ex-Guns N’ Roses drummer) does not appear scheduled for any specific day.

“New this year, the 11th edition of Merriweather’s internationally renowned ‘80s rock festival is expanding to a third day, with the festivities beginning with the annual Kix-off party on Friday, May 3rd, followed by a full weekend of performances on the main stage on Saturday, May 4thand Sunday, May 5th. Fore more information about this year’s festival, click here.

3-Day and VIP Packages on sale Wednesday, December 19 at 10am EST through ticketmaster.com

If available, Single-Day Tickets on-sale in the coming weeks”